Robert Courts MP, Parliamentary Under Secretary of State in the Department for Transport, with responsibility for aviation and maritime, has presented the Billy Deacon SAR Memorial Trophy to three of HM Coastguard’s search and rescue crew in the UK, recognising their outstanding performance in dangerous circumstances in 2020-21.

Winch paramedics Abi Wild and Niall Hanson, and winch operator Ginge Steabler, were presented with the memorial trophy, and an inscribed Breitling watch, at the Air League’s Honours and Awards Reception Ceremony at the House of Commons, London on, June 22, 2022.

The 2022 award was made to winch paramedic Abi Wild who, at considerable personal risk, was winched onboard a stricken vessel being pounded by breaking waves on rocks close to Salcombe Harbour on 7 August 2021.

Abi was on duty with the HM Coastguard helicopter at Newquay when it was tasked with rescuing the crew of the yacht, which was being rapidly broken apart. When onboard, Abi was able to reassure the two people below its deck and, with great difficulty, assisted them into the rescue harness.

Intense physical exertion was needed to combat the force of the sea, as the yacht was continually enveloped in rising waves, with Abi fighting to hold on to avoid being swept away as she completed the rescue.

Winch paramedic Niall Hanson and winch operator Ginge Steabler received the 2020 award following their work to recover two people from the water in hazardous conditions on the south-west coast during the summer of 2020.

Maritime Minister Robert Courts said: “Abi, Niall, and Ginge epitomise the spirit of the maritime sector, and their bravery is an inspiration to us all. They were able to save lives because of their rapid thinking and actions during dangerous events which risked their own lives.

“It is a tremendous honour to present the Billy Deacon Award to them – it is truly well-deserved and a reflection of their dedication and commitment to the service.”

George Rawlinson MBE, Award Committee chair, said: “Great courage, skill and determination are needed during these events, and the efforts of those called to help exemplify how fortunate we are to have such a brilliant Search and Rescue Service throughout the UK and Ireland.

“Despite great personal risk and receiving an absolute battering from the elements, Abi Wild’s relentless perseverance ensured a successful outcome was achieved in 2021. This is a testament to her bravery and professionalism. Abi is greatly deserving of this award however, we must also recognise the pilots and rear crew of the helicopter, who were integral to her success.

“In 2020, Niall faced being submerged by breaking surf and his superb teamwork with winch operator Ginge was essential. Their lifesaving skill and determination was exemplary, and they too thoroughly deserve this award.”

Citation for the 2022 Award

The HM Coastguard helicopter based at Newquay was tasked just after 9 a.m., to a distress call involving a yacht with two people on board which had been swept onto rocks on the shoreline near Salcombe and was at risk of breaking up while being pounded by breaking waves. The crew of the yacht were in a life-threatening situation and desperately needed help.

Arriving on scene 17 minutes later, the crew of the helicopter could see a perilous situation. Rough seas were constantly washing over the deck of the yacht, which was rolling violently due to being aground and the force of the breaking waves. A decision was made to place winch paramedic Abi Wild on board. The rescue would be further complicated due to the close proximity of the cliffs along with the yacht’s mast and rigging being in the way.

It took great skill and teamwork to winch Abi on board. On landing, she was immediately engulfed by waves and was even submerged under water several times, requiring great physical exertion to avoid being swept away once she was onboard the stricken vessel.

With courage and professionalism, Abi was able to focus on the crew of the yacht, who were sheltering in the cockpit. Due to the extreme conditions, it was difficult to communicate with them. Abi was eventually able to place rescue strops around them and manoeuvre them into position for rescue. Always ensuring the winch cable to the helicopter did not become tangled in the yacht’s broken rigging, Abi gave the signal to hoist and in one lift, she and the crew were winched to safety. Once on board the aircraft, before tending to her own physical injuries from the rescue, Abi administered medical attention to the casualties during the flight to hospital.

Information about the award

Sponsored by Bristow Helicopters and Breitling UK, the trophy was established in memory of Mr. Billy Deacon, winchman for Bristow, who was tragically lost while carrying out his duty on behalf of the HM Coastguard search and rescue (SAR) helicopter based at Sumburgh in Shetland in 1997.

It was in November 1997, that the merchant vessel Green Lily got into difficulties in extreme weather conditions, hurricane force 12, with 15 crewmembers on board.  With the vessel foundering, five crewmembers were taken off by the Lerwick Lifeboat, a feat honoured by the coxswain receiving the RNLI’S Gold Medal, its highest award for gallantry, often referred to as the lifeboatmen’s VC. As the Lifeboat was unable to recover the rest of the crew, and with the Green Lily very close to the rocky shoreline, the remaining crew had to rely on the SAR helicopter for rescue.

In mountainous seas, Billy was winched down to the deck of the vessel. Once on board he placed the remaining crewmembers, two at a time, in the rescue strops and they were all winched to the safety of the helicopter. As the helicopter was in the process of recovering Billy, who was alone on the deck and with the ship now on the rocks, he was washed overboard and engulfed by the waves.   In recognition of Billy’s outstanding courage and bravery in the most severe and demanding conditions, he was posthumously awarded the George Medal. 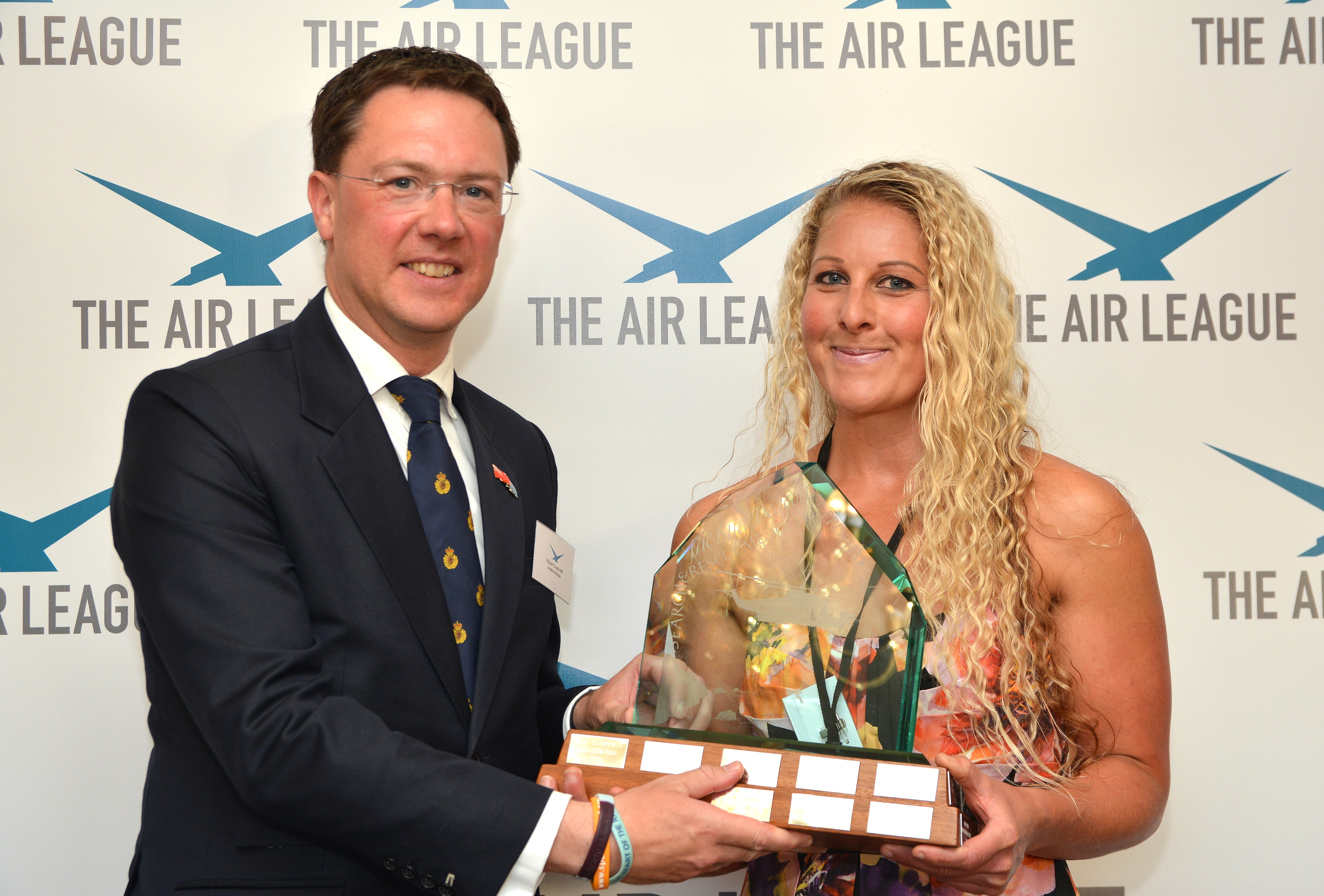 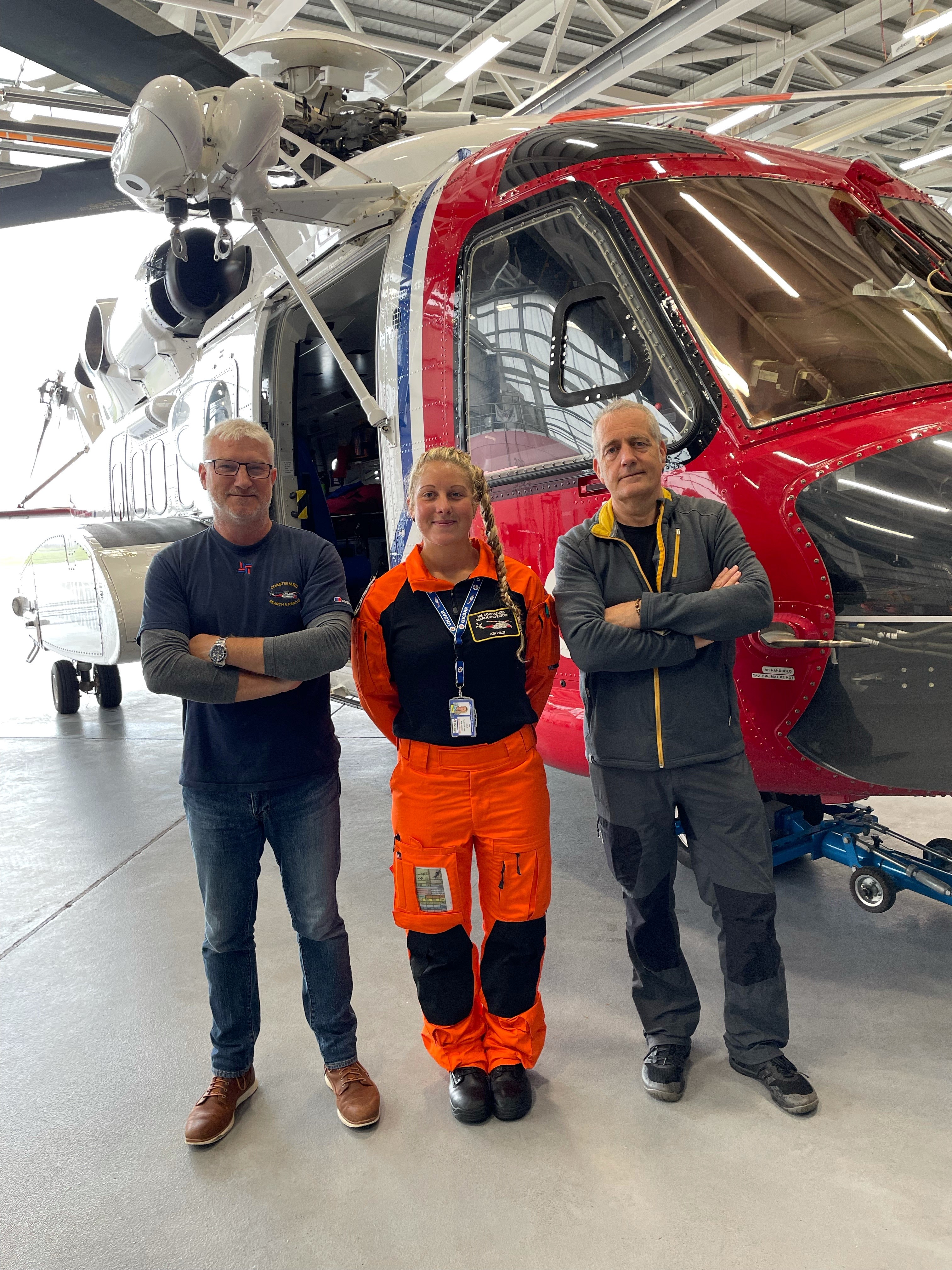 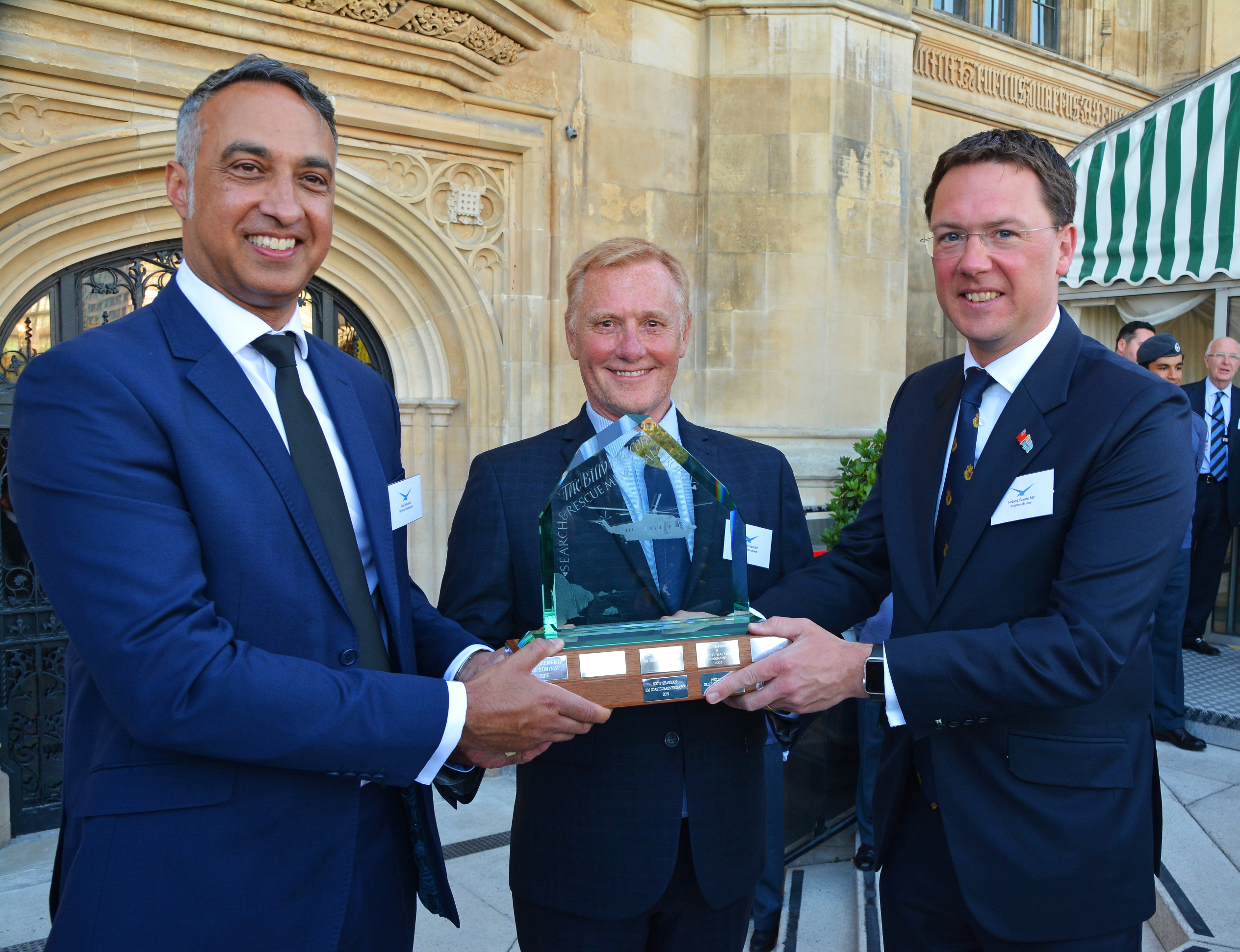 Niall Hanson and Ginge Steabler receive the 2021 Billy Deacon Award from Robert Courts MP, Parliamentary Under Secretary of State in the Department for Transport (BD2021 Image 1).