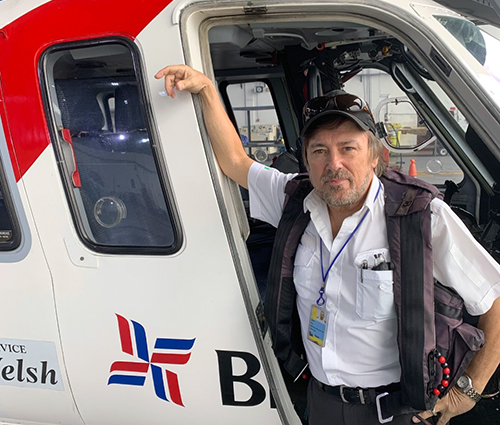 "I knew I wanted to continue flying helicopters as a civilian," said Davis.

Davis had a good friend who was with him in Korea who joined Air Logistics after his time in the Army. He flew offshore off the coast of Louisiana and Texas. He helped Davis get an interview and Davis joined the company shortly thereafter.

Davis started out flying Bell 206s, and he quickly volunteered for everything he could. Within four months of joining the company, he completed his airline transport pilot license (ATP), a B0-107 helicopter transition and Aérospatiale Twinstar helicopter ground school.

"I'm still very proud of these accomplishments today," said Davis. "This company has allowed me to progress through many opportunities. I could not imagine a more exciting life. As I continued my career with Bristow, the opportunities kept coming!"

In 1992, Bristow secured a contract flying for the United Nations in El Salvador, Central America. The country was coming to the end of a civil war that devastated the country. The contract was for five Bell B206 Long Rangers. The pilots went to live in San Salvador and fly when needed. Davis volunteered and eventually was chosen to go with four other pilots.

"I was excited to say the least," said Davis. "Not only was I flying in a challenging environment, where one minute I might be landing to a top of a dormant volcano at 7,000 feet and the next minute landing on the beach; I was also learning another language and meeting people who worked for the U.N. from all over the world.

"This was a 'peace observing' mission, so it was relatively safe," added Davis. "It involved flying the U.N. officers around the country to meet with the guerrilla commandantes and vice versa. After two great years, the mission ended, and I found myself back in Louisiana flying offshore again. I discovered during this experience that I wanted to be an international pilot, but that wouldn't happen for a few more years."

From 1994 to 1998, Davis continued in the Gulf of Mexico (GOM) flying to the offshore rigs and platforms.

"In the meantime, I continued to check in periodically with international to let them know I was still interested in flying overseas," said Davis. "I did not waste my time in the Gulf, though; I took advantage of the time to get a few more aircraft transitions.

"During this time, Davis transitioned to the Bell B212/412 and the Siskorsy S76, which gave him an opportunity to ferry aircraft all over the world.

"Bristow gave me the opportunity to ferry aircraft on all continents except Antarctica and Australia," said Davis.

In 1998, Bristow secured a contract with the U.S. State Department to fly supplies from the island of Cyprus to the U.S. Embassy in Beirut, Lebanon.

"It was too dangerous to fly into the Beirut airport and drive the supplies to the Embassy because the neighborhood was occupied by Hezbollah, a terrorist organization," said Davis. "I was to ferry a B412 from Louisiana to Dover Air Force Base, where the aircraft (and me) was to be put on an Air Force C-5 Galaxy jet and flown to Cyprus.

"On the way over, we stayed in Catania, Sicily, for a couple of days," said Davis. "Catania is a beautiful Italian city that lies at the base of Etna, an active volcano. The crew of the Galaxy adopted me as one of their own. We got to do a lot of sightseeing together while we were there.

"On takeoff from Catania for Cyprus, the Major and Captain asked if I would like to sit in the cockpit for the whole trip," explained Davis. "Needless to say, I said yes. Of course, it was not at the controls, but it was right behind in the engineer's seat. It was one of the most memorable moments of my career. We landed in Cyprus and I delivered the B412 to the crew that was flying this mission."

Davis returned to the U.S., and a few months later, got a call asking for him to take over for one of the pilots. This marked the beginning of his career as an international pilot for the next 22 years.

"We didn't have to fly to Beirut too much, so when we weren't flying, we were travelling around Cyprus on our Harley Davidsons we purchased in Nicosia off the showroom floor," recalls Davis. "It was one of the best jobs I ever had. And I still have the Harley!"

This mission ended in the summer of 2000.

From Cyprus, Davis went to Egypt. Davis ferried the same B412 he flew in Cyprus to Bristow's sister company Petroleum Air Services in Cairo, Egypt. There he flew out of Alexandria, Port Said, and Ras Shukar, a base on the coast of the Red Sea at the base of Mount Sinai.

"I loved exploring all the history in the area," remembers Davis. "Of course, I did the necessary sightseeing of the Pyramids, State Museum and Luxor."

Davis spent a year flying for this contract.

In the summer of 2001, Davis ferried the aircraft to Mauritania, where he lived and worked flying offshore.

A few months later, Davis ferried the aircraft through the Sahara Desert with overnight stops in Mali, Ivory Coast and finally to Ghana, Africa. He then hopped on a plane and flew to Turkey, where he lived and flew a B412 offshore for several months.

"That job ended around Christmas, and, for the first time in a few years, I didn't have a job to go to," said Davis.

So Davis headed back to Louisiana and flew a few months in the GOM until his next international assignment.

His next international mission was flying Bell 412s and 206s, and the Sikorsky S-76 for Pan African Airlines in Escravos, Nigeria, which Bristow had recently purchased. Davis flew for this contract for five years, then transferred to Bristow in Nigeria, where he has flown for the last 18 years.

"I've come to love Nigeria to the point I consider it a second home," said Davis. "The people are friendly, and the Nigerian pilots are some of the best pilots I've had the privilege to fly with. What also makes Nigeria unique is the number of pilots and engineers that are here from all over the world. It makes for a great eclectic experience!

"These days, Davis is an S-76 captain flying out of Port Harcourt, Nigeria, flying to oil installations offshore and in the swamp areas for Agip, an Italian oil company. Due to the pandemic, Davis has been there for four months."

The job is interesting, as we fly both offshore and onshore to the oil platforms, and rigs," said Davis. "Although it is not frequent, I do get to see the occasional monkey or snake or other wildlife. But what I really enjoy is the food here at Agip. Because it's an Italian company, they serve Italian food. It's hard not to gain weight though eating all the pasta."

Davis cites his more than 16,000 safe hours of flight time without an accident or incident as his greatest achievement during his career at Bristow. "I have always taken pride of doing my job in a safe and efficient way," said Davis.

"Bristow has allowed me to pursue and achieve amazing experiences that I myself would never have dreamed possible," said Davis. "I have had a wonderful career with Bristow. So much so, I don't want to retire anytime soon.

"When asked who has made the most impact on his career, the answer comes easily to Davis: his wife Jeanie. "Her love, patience and willingness to allow me to be gone from home – sometimes for extended length of times – have allowed me the freedom needed with an international career," said Davis.

Davis has this advice for someone just joining Bristow: "Take advantage of every opportunity Bristow gives you. Learn the company procedures well. Ask the old guys questions. We've made all the mistakes. Keep a positive attitude and fly safely.

"When Davis is home in Colorado, he enjoys fishing, hunting, skiing and drinking coffee in the morning and wine in the evening.