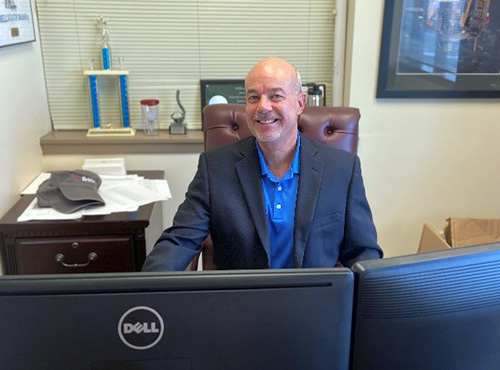 "My favorite part of my job is that I get to deal with people every day. I love providing solutions and working with customers every day to give them the best customer service in the industry," said Director of Customer Services for the Gulf of Mexico Ricky Estep.

A seasoned veteran of the industry, Ricky joined then Era Aviation in 1989 as a graduate fresh out of college with an Accounting degree.

"I noticed an Auditor/Accountant job advertised in the newspaper," said Estep. "I thought it would be an interesting company to work for so I sent in my resume.

"I loved my job from the beginning," said Estep. "I was flown to Anchorage, Alaska, headquarters for Era at that time, for a week of training. I met Carl Brady, the founder of Era, before returning to Lake Charles, Louisiana, for my position as an auditor/accountant.

It was not long before Ricky was promoted to Accounting Manager supervising a staff of six.

"My position as Accounting Manager covered all aspects of accounting for the company, including supervising all financial transactions, analyzing revenue and financial statements, payroll, administration of all government contracts, annual budget preparation and conducting base inventory audits," he said.

"I continued in my role as Accounting Manager until 2008, when David Stepanek, who was then Era's chief marketing officer, walked into my office," said Estep. "Dave approached me about leaving accounting and to come work for him in marketing as contract manager. I have always been grateful to Dave for this change in my career path and for bringing me into marketing/customer service."

In 2012, Estep accepted the position of marketing manager – Gulf of Mexico for Era, a role he maintained until his promotion to director of customer services for the Gulf of Mexico in 2015.

"In my position, I focus on customer advocacy within the company to ensure the needs of the customer are satisfied and that we not only meet, but exceed, their best expectations," explained Estep. "If issues arise, it's important to listen effectively to find the root cause of the issue and communicate in a clear and friendly manner to resolve the issue and keep the customer happy."

"My various positions have allowed me to travel throughout the U.S. and meet a wide variety of people," said Estep. "These interactions have given me the opportunity to participate in activities that would not have been available to me otherwise. "On one of my trips to Alaska, I was able to see the Portage Glaciers in Alaska and go salmon fishing. These were once in a lifetime moments for me, especially since I am from Louisiana."

Throughout his 31 years, whether under the name Era Aviation, Era Helicopters or Bristow, Estep has given 100 percent regardless of the position he held.

It is not all work and no play for Ricky, though. Outside of the office, he has a myriad of interests.

"I started playing poker in 1999 and really enjoy the competition and strategy involved in playing the game," said Estep. "I now travel during the year to various events, including the World Series of Poker every summer in Las Vegas – it is really something I look forward to and it's lots of fun playing with the pros.

"I have golfed since age 15 and at one time was a fairly good golfer," said Estep. "Now I mainly play with customers in company scrambles, but still enjoy a round with my friends from time to time.

"Most importantly, my family always comes first. I became a first-time grandfather 10 months ago and that was one of the proudest moments of my life," said Estep. "It is really special watching my grandson grow and including him as a big part of our family going forward. I also really enjoy barbecues and having the family over for a swim and good food and adding my new grandson to those events is really special."

Estep's advice to anyone starting in the industry: "Work hard and place safety first every day and you will have a great career at Bristow. The company has the best and most talented group of people in the industry and is a pleasure to work on this great team."