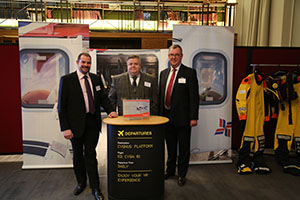 Bristow celebrated its client ENGIE E&P UK’s achievement of first gas in the Cygnus Field in the Southern North Sea with a high profile event on January 19, 2017. UK Area Manager Matt Rhodes and Senior Manager Business Development for Europe Caspian Region Peter Gay joined Cygnus team members and other key figures from industry, politics and the press, at the event, which included a Bristow-branded flight experience.

Guests were able to take offshore flights throughout the evening via the Cygnus Virtual Reality application, which was demonstrated in a Bristow helicopter-themed departures lounge.

“ENGIE E&P is one of Bristow’s key clients in the Southern North Sea and was the launch customer for the oil and gas AW189. It was an honour for Bristow to be involved in their first gas celebrations,” said Gay. “The Cygnus project has been a challenging journey and one that has been delivered safely. Bristow brought in new technology aircraft, the AW189, to support the project, and enjoyed working closely with their professional team. We look forward to continuing the project and working with ENGIE not only on this, but in other regions.

Bristow’s involvement in the event, held at the highly appropriate Institute of Engineering & Technology, illustrates the company’s critical and valued partnership with ENGIE E&P UK. Bristow continues to support the safe delivery of gas from the Cygnus – which represents a significant boost to the UK’s long term energy security, with an estimated production life exceeding 20 years.