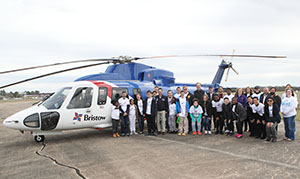 Bristow gave eight children the ride of a lifetime on a Sikorsky S-76 on January 28, 2017, as a prize for a fundraising competition for the Houston chapter of Big Brothers Big Sisters. In the fundraiser, aptly named "Lift Up My Little," volunteer mentors, called Bigs, reached out to their networks to raise funds for the charity, with the top eight fundraisers winning the opportunity to take their "Littles" on a Bristow helicopter flight over Houston. Houston-based employees volunteered to help out at the event, welcoming the children and preparing them for their ride. The competition raised $20,000 for the organization and was covered on the evening news by the local NBC television affiliate.

"We are proud to support the great work that Big Brothers Big Sisters does in the community," said Bristow President and CEO Jonathan Baliff, who attended the event. "It was amazing to see the children's excitement, as they learned about the aircraft and boarded the flight. We could be helping create the future pilot and engineer team members for Bristow."

"I love being here today," said Captain Errington. "It's a nice change of pace for us and it's going to be really great to see these kids get all excited about riding in a helicopter."

"Big Brothers Big Sisters and Bristow are similar in that both organizations are committed to ensuring the people they serve safely and effectively get to where they need to be," said CEO of Big Brothers Big Sisters Lone Star Pierce Bush. "We cannot thank Bristow Uplift enough for providing the once-in-a-lifetime opportunity for not only the top eight Bigs and Littles, but also the opportunity for more children who we will be able to match with an uplifting mentor in the future thanks to the over $20,000 raised during this campaign."

This is the third year that Bristow supported Big Brothers Big Sisters, which benefits youth ages seven through 14 in the Greater Houston area through meaningful mentoring matches between adult volunteers and children.