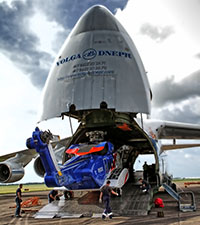 Bristow was the first helicopter operator on the scene to evacuate workers from the Goliat platform in the Barents Sea August 26, 2016, when the platform lost power and the decision was made to send non-essential personnel to shore. The search and rescue (SAR) crew onboard the aircraft was from Bristow’s Americas Region, conducting its first mission since arriving in Hammerfest from New Iberia, Louisiana, just the week before to support expanded operations in the region.

Working closely with the Joint Rescue Coordination Centre Northern Norway, Bristow utilized a Sikorsky S-92 to quickly lift 27 employees from the platform in two flights, then conducted a third SAR flight to the platform to be on standby in case additional evacuations were necessary.

“This was a well-organized collaboration,” said SAR Aircraft Commander Nuri van Hatturn, who is a former Bristow Academy flight instructor. “It was an unusual mission but our crew did a fantastic job adapting to the situation and carrying out a successful mission.”

The S-92 utilized for the rescue mission was one of two S-92s that was also flown to Norway from New Iberia the week before on an Antonov 124, one of the largest aircraft in the world.

“The detailed coordination between our teams to ready these crews and aircraft for operations in Norway was a true testament to Bristow's global collaboration to find solutions for clients,” said Bristow Americas Regional Director Samantha Willenbacher. “Our teams worked tirelessly under a very tight schedule in the midst of Louisiana’s historic flooding to complete the necessary work to ensure we were ready to operate on schedule for the client.”

To prepare the aircraft for shipment, Bristow reconfigured the S-92 helicopters with a 25 percent fuel load and lowered the struts to accommodate the Antonov's ceiling height. To load the Sikorsky aircraft, the front of the Antonov was lowered to the ground and the nose opened to create enough room for the S-92s, and the helicopters’ main and tail rotors, stabilizers, and spare parts were crated and secured into the airplane.

The Acadiana Regional Airport, which is home to Bristow’s New Iberia base, is one of the few airports that has the capacity to handle an aircraft as big as the Antonov 124. The mighty airplane has a wingspan of 240 feet and maximum take-off weight of 392 metric tons, enabling it to accommodate the two S-92s, each with a width span of 17.3 feet and body length of 56 feet, and a weight of 15,500 pounds.