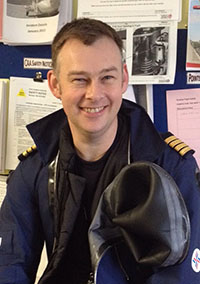 Bristow caught up for a quick word with Deputy Chief Pilot Simon Kovach, who flies for Bristow’s oil and gas operations out of Scatsta in the Shetland Islands. In this interview, Kovach discusses the pride he takes in his work, how his background prepared him for his current role, and the greatest lesson learned in his career.

What is your current role at Bristow?

I'm currently employed as a Sikorsky S-92A captain and the deputy chief pilot (DCP) at Bristow Scatsta, working a 15 on / 13 off rotation in the beautiful and very remote Shetland Islands. As a DCP, I assist the chief pilot with his duties and deputise for him where required.

What is a recent success you're particularly proud of?

In the oil and gas industry, we principally take people to and from work, greatly contributing to the successful operations of the hugely important UK oil fields. It sounds a bit cheesy, but I take immense pride in flying out of a remote and relatively isolated airfield in the far north of the Shetlands, to a variety of locations in the Atlantic or the Northern North Sea, and doing so on time, efficiently and – most important – safely. It is an honour and privilege to have 21 lives in your hands, and I take it very seriously.

What are some of the challenges of flying in the region?

The weather in the Shetland is a constant challenge and can add a myriad of problems to our operations, from thick pea-soup fog one minute to thunderstorms and lightning the next, and that's just in the benign summer weather! In addition, we have seen an upsurge in flights partly due to the EC225 grounding, but also due to significant extra work in the West of Shetland oil fields.

What in your background prepared you for this assignment?

I was a support helicopter pilot in the Royal Air Force for 17 years before joining Bristow, leaving as a squadron leader in charge of a flight of personnel at the operational evaluation unit. As both a pilot and a manager in the military, mostly flying over green and yellow land then to blue sea nowadays, I feel I was very well-prepared for the DCP role, which I enjoy immensely.

What was the greatest lesson you learned from a colleague?

Every day in the cockpit is a school day. You should never stop learning about aviation and should never think you know it all. I have had a varied and fulfilling background in military and civil aviation for more than 20 years now, yet it still amazes me how much I can learn from the most junior pilot or pretty much any engineer.