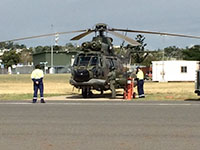 Bristow Defence Industries (BDI) kicked off its annual support of the Republic of Singapore Air Force's Exercise Wallaby. The event, which runs September 11 – November 8, 2016, is an annual military exercise conducted in the military training area at Shoalwater Bay in Central Queensland, Australia. The exercise varies in size but can involve land, sea and air elements, inclusive of heavy lift helicopters and various fixed-wing aircraft. More than 6,000 specialists and troops participate in the scenarios.

As part of Bristow's contract with the military, BDI staff have deployed to support six AS332M/M1 helicopters at Rockhampton and Shoalwater Bay Training Area, Queensland.

The logistics support element involves seven containers, plus motorized ground support equipment and other equipment being packed, loaded and transported over 600 kilometers. At peak periods, up to 41 BDI personnel will be deployed at Rockhampton Airport and in the exercise training area. The Super Pumas supported by BDI will be one of three helicopter types involved, with transport and fighter aircraft also active.

During the course of the deployment, BDI will provide in-field maintenance capability to support the approximately 350 flying hours. The team will carry out scheduled maintenance up to 250 hourly services and major rectification support for the aircraft. The exercise environment is dynamic and constantly changing with extended hours and roster variations being a constant. Through the assistance of BHA's IT Department, a CITRIX environment has been established to support the operations.

"We wish the BDI support team, whether at home base or deployed, a safe exercise," said BDI Chief Operations Manager Vaughn Whittingham. "In Exercise Wallaby 2015, BDI supported a 100 percent mission success rate, and we wish our team every success again this year."