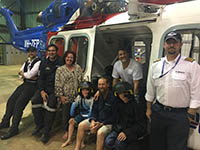 Bristow’s Exmouth search and rescue (SAR) crew winched a family of four to safety off the coast near Exmouth, Western Australia, on August 31, 2016, after becoming lost on a fishing outing.

The crew located the family’s small vessel floundering outside the reef, offshore from Ningaloo Station, and performed the rescue after it was established that there would be no timely alternative given the late afternoon hour.

“Conditions in the area were becoming difficult with a proximate reef, a building swell and winds increasing above 25 knots,” said Pilot in Charge Matthew Nielsen. “Suffice it to say, with no engine, no radios, a failed anchor and no surface help on the way… it would not have been a great place to spend the night – it would have been potentially disastrous. The four survivors were safely returned to Exmouth and delivered into the care of the local police.

“A special thanks to Senior First Officer Andrew Humphries, the winch operator, Dan Summers, and wireman, Matt Vermeulen, who conducted a safe and efficient rescue under some time pressure,” continued Matthew. “Thanks also to the Exmouth Engineering team for such a quick response.”