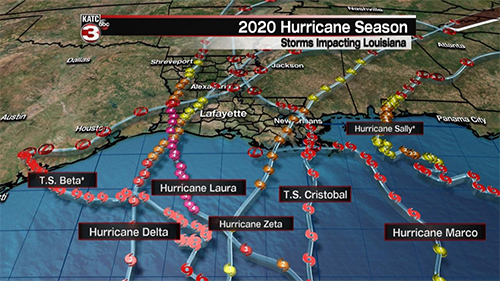 Bristow had to evacuate people from offshore platforms and move aircraft out of harm’s way at least seven times in 2020, which set a new record for Louisiana.

It has been a very active hurricane season, and Hurricane Zeta hit Louisiana as a Category 2 hurricane on October 28,  setting the record for most named storms in the state in one season.

For Bristow team members in Louisiana, it has been an extremely busy season evacuating offshore workers in the Gulf of Mexico and then moving around 30-40 Bristow aircraft at its bases out of the path of the storm.

Hurricane Zeta was the seventh major storm where Bristow had to evacuate workers off the platforms and then move aircraft, following the devastation from Hurricanes Laura and Delta as well as tropical storms. Zeta ties Louisiana with Florida in 2005 with the most landfalls in any state in one season.

Kurt Covington, Director of Ground Operations, manages the daily storm planning meetings and keeps up with the latest weather forecasts for each storm. Besides flight ops, maintenance and ground ops, the daily meetings also include representatives from legal, safety, finance, business development, etc. “We all understand the risks and the things we should be doing. It is a true team effort to put this all together and make it happen.”

“It is direct communications with getting our customers safely back in. Keeping ourselves adequately spaced before the expected landfall of the storm. We like to give ourselves 36 hours of cushion, where we are done with our actions before the storm hits,” Covington said. “My role is to keep everything synchronized and everyone communicating with one another. By having these daily calls, it eliminates hundreds of follow-ups calls and emails. Everybody has a stake in the call, and it is an open forum.”

“We have had some storms this year where they are dragging debris such as convection and nasty weather well after the storm has passed. It is kind of like a tail behind the storm and you have to wait for that to clear up,” Covington said. He also cautions to never compare one storm to another – they are all different, he says. In his 31 years with Bristow/Era, this has been the busiest year ever.

Bristow Director of Operations Jason Glynn agrees this year is one for the record books in terms of activity but says our success would not be possible without the constant preparation and planning before each named storm even enters the Gulf of Mexico.

“There are a lot of flights on the front end to get everyone in that has not been already scheduled, it then goes still for a couple of days and then a fallback to get everyone out again after the storm passes,” Glynn said. He says the number of flights does generate a “little uptick” in revenue, but there is also a period of 2-3 days while the storm is passing that no flights are occurring. 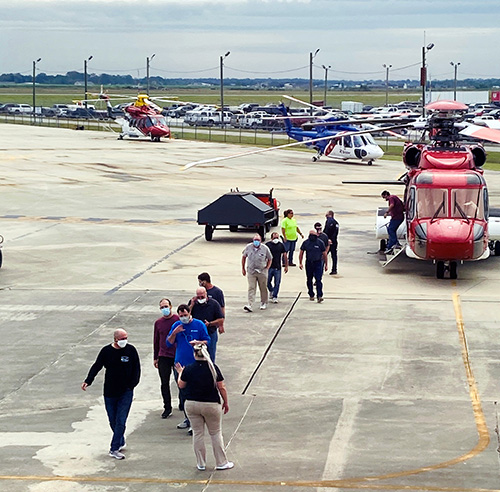 Shown here are evacuating customers from an S-92 at our base in Houma, Louisiana. Bristow works closely with our customers and has well-developed plans to ensure the safety and care for the people who go to work offshore.

The intensity of the storm and the cone of error often impacts planning. “We will push aircraft to Lake Charles and to Texas because usually the west side of the storm is better weather-wise. That has been our strategy for most of the year, particularly diverting to Conroe (Texas) since they are 100 feet above elevation and by the time the storms get there, they have petered out. They also have enough hangar space for our aircraft.”

For a storm like Zeta, the team flew some aircraft to Abbeville and Lake Charles. “We try to use our own bases when we have to evacuate an area because we already have our own technicians, fuel and services and even housing in some cases there. But right now, with the damage and no housing from Hurricane Laura in Lake Charles, crew stayed in Conroe instead,” Glynn said.

“When you try to move 15 to 40 helicopters you have to think about the base support, maintenance, tooling and parts. If we can make one jog to the west and be done, we know that the chance having to move again is so unlikely and the crews will be rested and relaxed,” Glynn said. “There is a rhythm to it and when you put these aircraft in the hangar, it is a lot like playing Tetris since they don’t have these vast hangars just sitting around. You really have to stack and pack them.”

Bristow aircraft at the airport at Conroe, Texas, after evacuating for a hurricane.

After the storm passes, the helicopters and personnel redeploy back to the Bristow Gulf Coast bases to begin transporting workers back to the platforms after the customer assesses them for damage.

Although Houma has a hangar that can handle up to a category 3 hurricane, what happens if a tornado hit? “We will never pack that facility with aircraft because if a tornado hits it, we can’t go buy helicopters on Amazon or Walmart if they are destroyed,” Glynn said. “We do have spares, but if a tornado takes out a whole hangar, then you will really have some client problems. I understand some customers may not like us flying them far away from the path of the storm, my response has always been our aircraft are critical for your operations and an extra hour worth of flight time to come back to base, it is worth it to not lose any aircraft. ”

“It is a fine line where you move aircraft and we just need to open the channels of communication up with our customers, so they understand why we have moved our aircraft to a particular location,” Glynn said.

“The first thing we do whenever a storm is predicted; is we look at all of the scheduled maintenance coming due on the fleet. We start cleaning it up in advance and try to get it done early that way when our customers want to evacuate, the aircraft are not due any maintenance,” said Ben Hulshoff, Bristow Director of Maintenance. “Once that is all cleaned up, we get all our passengers back to the beach.”

“Whether we are doing the maintenance at Houma or a remote location, our standards are not going to change so we are going to take maintenance stands, tools, computers, and will load up a cargo truck with everything we need,” Hulshoff said. “The aircraft fly out and most of our technicians will drive to base and would perform the maintenance the same as we would in Houma.”

After the storms passes, customers will want their workers back on the platforms as soon as possible. “We make sure all the aircraft are ready to go and follow them back to the base once it opens back up.”

“If an aircraft is in maintenance and is not flyable, then we have a decision to make. Either we leave it where it’s at, or we have to get trucks to haul them away,” Hulshoff said. “We pay special attention to the big iron: S-92s, AW189s, and AW139s. You have to closely evaluate it.”

Before hauling off an aircraft on a truck, the human factors need to be considered. “An S-92 is a big machine to put on a truck and there are only a few people qualified to do it. To move an S-92, you have to take the horizontal stabilizer off, squat the gear, take the beanie hat off and just a lot of disassembling, prop the nose up and get special permits for an oversize load which is difficult on holidays.”

And then you also must carefully look at the maintenance on the aircraft. For Hurricane Zeta, the main transmission on an S-92, probably the most difficult job on the aircraft, was in the middle of being changed. “The transmission had already been removed and we did not have enough time to finish the work before the storm came. To move that S-92 onto a truck, it has to have the transmission installed because it is structure that you don’t want to bend, and we have to lift the aircraft (a lifting point is attached to the transmission).”

“We had a choice to go backwards with our maintenance and reinstall that transmission and haul it to Conroe and then pull it back out when we return. There is a lot of risks for human error. The best decision was to leave it in a nice new hangar that should be able to handle this storm.”

Hulshoff says it much easier to move an AW139 and no special permits are needed but moving an AW189 can be more challenging. “During the last hurricane, we hauled out two AW189s, one from Houma and another from Lake Charles. There are only a few AW189s in the U.S., so how many people have experience hauling a 189? We had to work with the trucking company to make the I-beams to hold the gear and we were able to get them out,” Hulshoff said.

Many employees are still dealing with the aftereffects of Hurricane Laura and Delta that impacted the Lake Charles area. “I am still living with a blue roof (tarps) on my home and everybody is still dealing with their insurance companies. We are living in a town that has been devastated by storm. We have to really watch out for one another,” Covington said. “We need to be kind, understanding and reasonable with our expectations.”

“We call it hurricane fatigue and it is big deal for our customers to shut down these facilities in the Gulf of Mexico,” Covington said. “You are getting out of your norm and you really need to be aware of the human factors and complacency. It’s like every time, ok, here we go again with another storm. At the same time, we take these storms very seriously and start circulating information as soon as we get it. We are prepped and ready for storm season and it is a big part of what we do. This year was just a little bigger.”

“We never stop learning from these storms and every year we will summarize those lessons learned at the end of the year. Those are the things we will discuss next season,” Covington said. 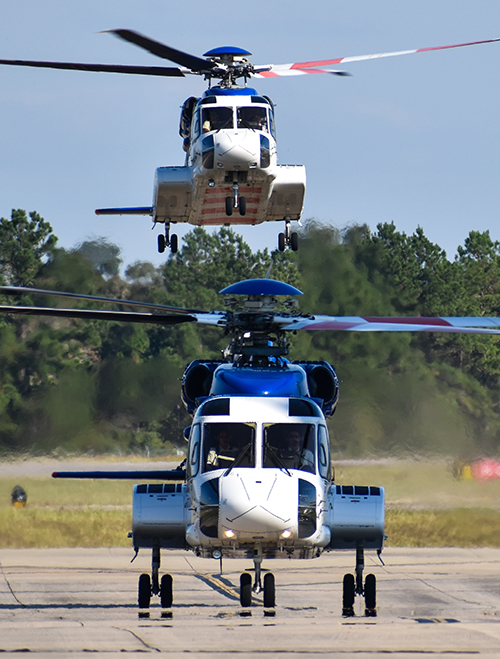 A pair of S-92s arrive at the airport in Conroe, Texas.