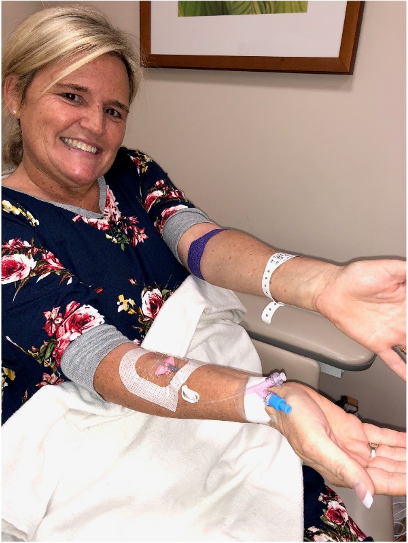 Bristow Administrative Rhonda Papadimitriou poses for her picture a year after her surgeries for testing to make sure she was still cancer free. She had two surgeries in 2017 to remove cancerous masses from her lung and breast.

Rhonda Papadimitriou, an administrative assistant who supports Era (now Bristow) ground operations and facilities based in Lake Charles, Louisiana, was getting a routine physical when her family doctor recommended, she get a mammogram since she was 45 and had not had one before. She had not done one before since her family had no history of breast cancer.

Her mammogram on January 24, 2017 discovered a lump, they had her take two more mammograms to be sure. The next step was to get a biopsy, which determined the lump was cancerous on February 11, but it was caught early enough, it had not spread and was considered the most treatable cancer with the highest success rate. “Well never in a million years I thought I would receive a phone call saying your initial test results have come back that you have breast cancer,” she said. The doctor said she would only need a lumpectomy, reconstruction and radiation treatments.

Her oldest daughter, Emilee, was getting ready to graduate from high school and Rhonda wanted to wait on the surgery until after graduation in May so she could be there for her daughter. “I was a cheer and a cross country mom and was scheduled to go on her senior trip and did not want to miss any of that,” she said. The doctor said she could wait on the surgery for about four months, but there was another complication that was about to happen.

In the meantime, Rhonda was going back and forth for checkups and on March 15 she had an MRI using a dye to look at the breast a little better. “At 8 a.m. the next day while doing a school project with my youngest child, Bailee, I got a call from the doctor while standing in a stairwell to be away from the kids,” she said. “During that MRI, they detected a mass on your lung but on the opposite side of the breast cancer.” She had to come back in the afternoon in Baton Rouge (a two-hour drive) for a two-hour CAT scan to look at her right lung further. But she first finished her project with the kids and then told her Director, Kurt Covington, what was happening.

The result from the scan was the mass was likely cancerous. “It was basically an incidental finding. I believe things happen for a reason and my reason for having breast cancer was to detect this lump and there would have been no way of knowing this mass was there in my lung until it had spread,” Papadimitriou said. “I like to tell people that breast cancer saved my life.” She first told her mother-in-law, dad and stepmother, then let everyone know.

Rhonda and her husband for nearly 30 years, Steve, decided that she was going to be treated at the University of Texas MD Anderson Cancer Center in Houston. MD Anderson had a pulmonary test that confirmed she had cancer in her lung, but it had not spread.

“One of my doctors was the head of the whole department would do the lung surgery, while his wife was the breast surgeon and would do the other one. He told me he could break my ribs and take out the lump using suction from the lung, but it was far into the lung or he could remove the whole lobe in her right lung,” she explained. The lungs have sections called lobes. The right lung has three lobes. The left lung has two lobes. A lobectomy may be done when a problem is found in just part of a lung. The affected lobe is removed, and the remaining healthy lung tissue can work as normal. According to the doctor, the advantage of taking out the whole lobe was there would be no need for chemotherapy or radiation.

Around April, the doctor said it was ok to wait until after graduation on May 15 and the senior trip and did all the intake for the surgery only a week ahead of time. “I was not sick, and I still wanted to do all things that I do and was staying busy at work,” she said.

The lobe from her right lung was removed on May 22 during a two-hour surgery with a week stay in the hospital with a chest tube. For the breast surgery on June 22, they first removed the lump with one surgeon and then another plastic surgeon went to work to reconstruct her breast. The surgery took about 10-hours. “All of my friends and co-workers wanted to know the latest after each surgery,” Papadimitriou said. “My family and friends took good care of my children while I was in the hospital each time.” 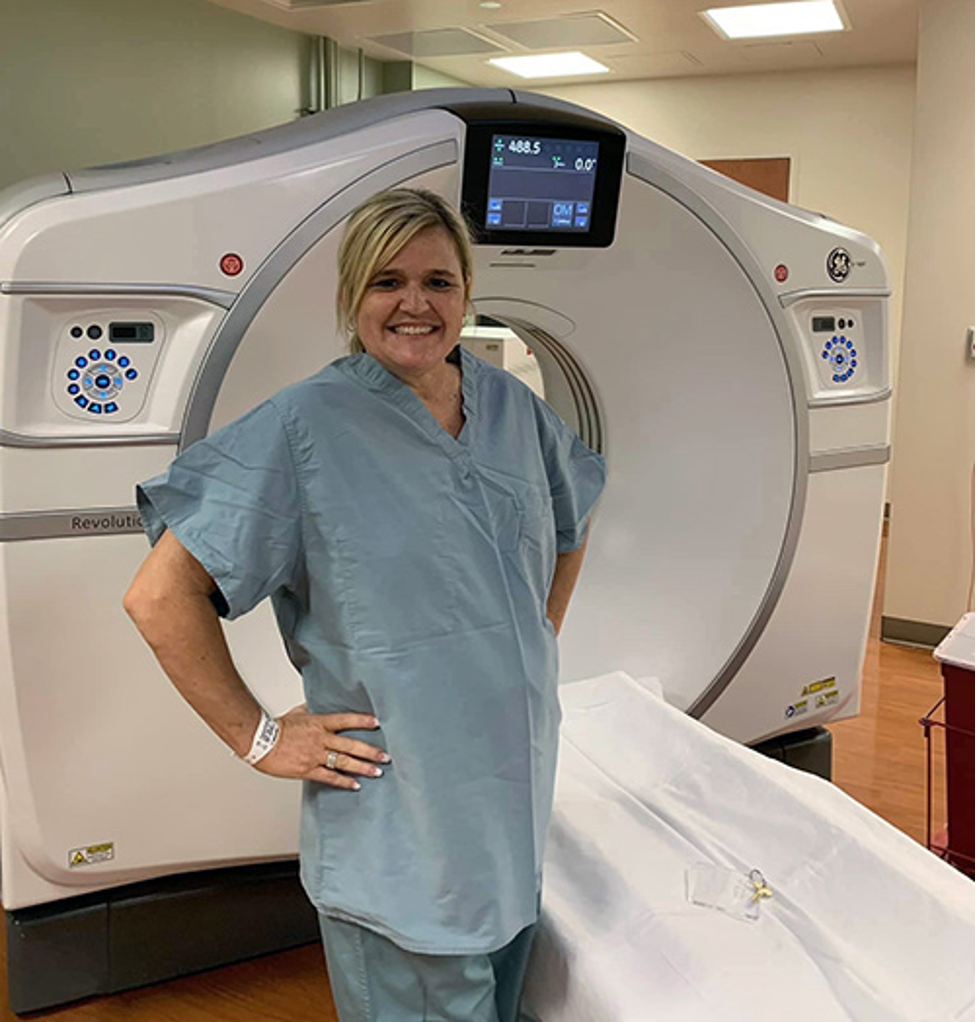 Bristow Administrative Rhonda Papadimitriou at one of the MRI machines at MD Anderson used to screen for cancer.

“After the first surgery, I was all black and blue and could not pick up more than five pounds. I still could breathe the same and I did not notice any difference. During the consultations, I had asked if I could walk, talk and what can I not do? The doctor said I would be able to do anything you had done before, and I said I don’t run marathons. He quickly answered you can run marathons too, but you won’t win. I said I had done a few with my daughter and I don’t care if I come in last and am just glad, I finished it.” She kept a teddy bear, called Sir Cough a Lot, close by her side for both surgeries. The teddy bear was a gift from the doctor. “I am hoping he made it through the storm damage to our home in Lake Charles from the two hurricanes this year.”

Following the breast surgery, she had to have 20 radiation treatments every weekday in August. She had to spend about four months away from work starting in May.

Papadimitriou supports all Era (now Bristow) locations in Alabama, Arkansas, Texas, and Louisiana and has been working for the company since 2006. Whether the refrigerator or coffee pot stops working, or that air conditioner is on the fritz, Rhonda says she is the go-to person. She also takes care of the overhead cranes, passenger scales and support equipment throughout the different facilities and maintains a good relationship with her vendors.

“Luckily, I like to talk with people, and I am in a people job where you have to talk with a lot of people daily. I will help anyone who calls me and if I can’t handle the issue, I will find someone that can. I am not the kind of person to say I don’t do that and hang up.”

Papadimitriou says she is doing great now and is glad she has remained cancer-free. She willingly shares her advice about her experiences and is always ready to help someone because that is just part of who she is.

For anyone that has ever had cancer, even if you are 100 percent cancer free, there is a lot of monitoring that’s required afterwards. Rhonda gets mammograms, CT scans, radiation visits, dermatologist and other doctor visits on a regular basis now. Even though she must attend a parade of doctors’ appointments, she gladly accepts that so she can be with family, friends and co-workers, whom she says were essential to surviving her battle with cancer.

At MD Anderson, they have a bell where patients can ring it when they are cancer free. Papadimitriou has rung that bell and has been there for many of the patients that have gone through similar difficulties. But what is a little different about her story is that she tells anyone that wants to hear it, that breast cancer saved her life. 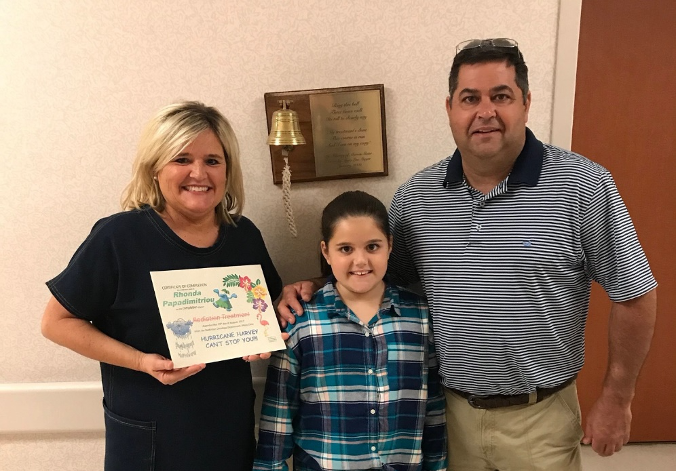 Rhonda, Bailee and Steve Papadimitriou pose for a picture after ringing the bell at MD Anderson that she is cancer free. Ronda also met with many patients at MD Anderson and helped them as much as she could. 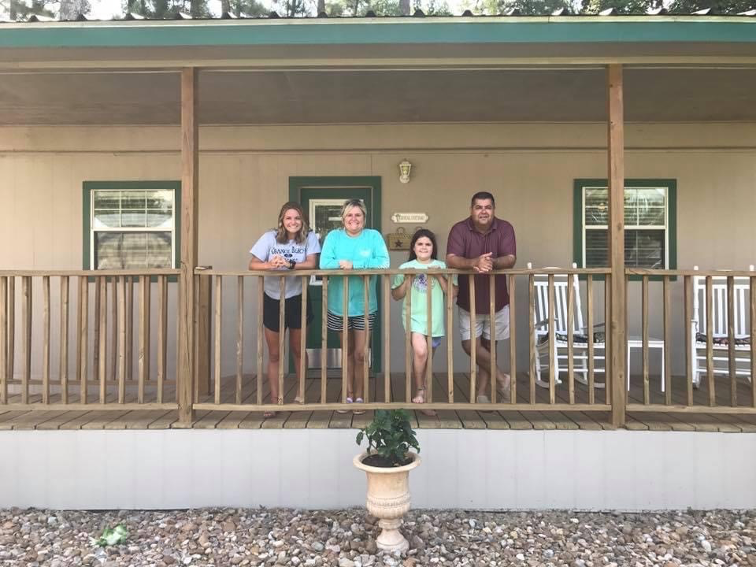 Rhonda Papadimitriou and her family stayed at the Hope Cancer Retreat in Houston while receiving her radiation treatments for breast cancer.