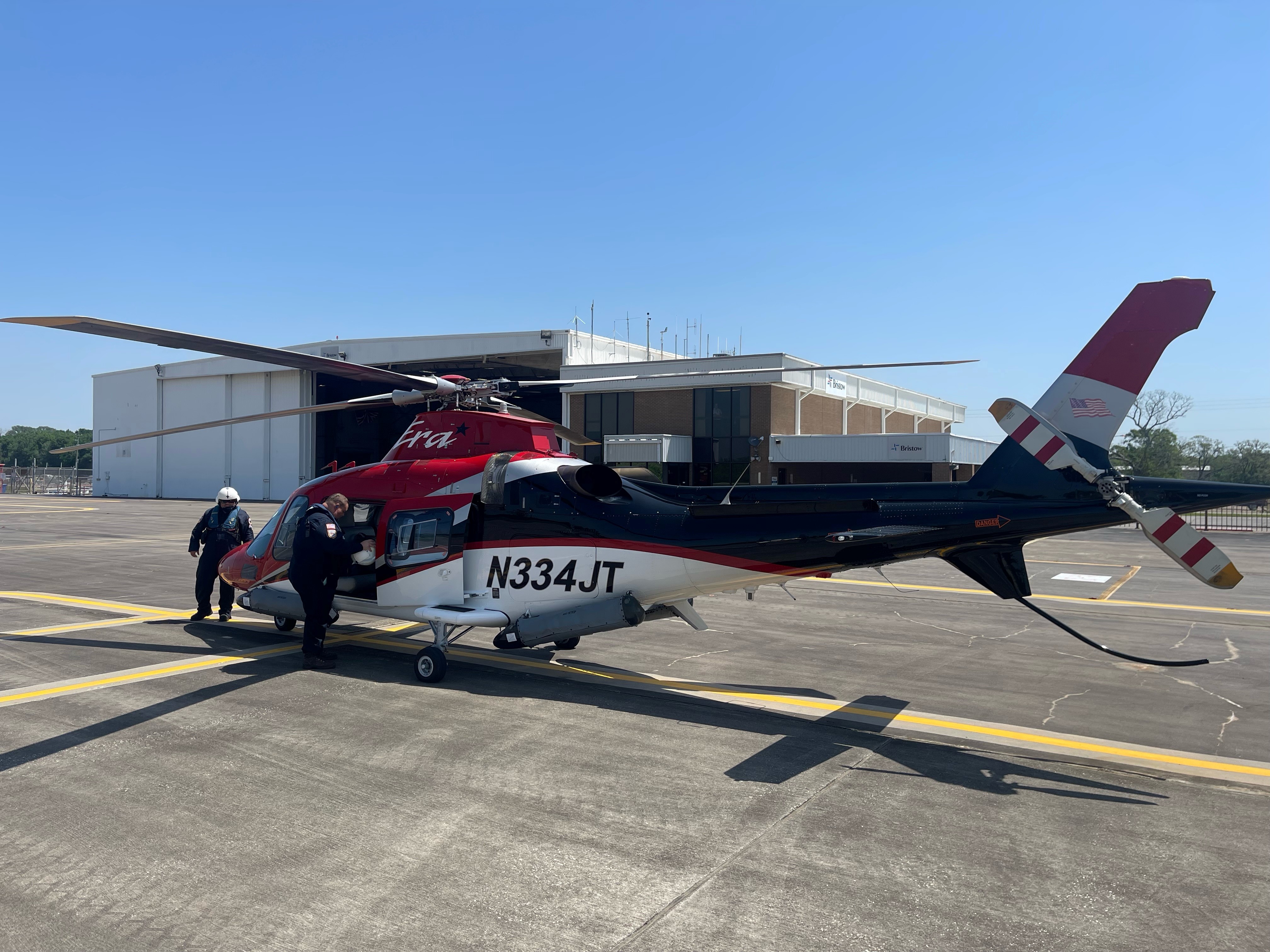 A BSEE passenger climbs into an AW109 at Brazoria, Texas. The ramp is big enough to handle storm diverts from Louisiana if needed during hurricane season.

Bristow is ready to expand its operations at its site in Brazoria, Texas, as they consolidated Era and Bristow facilities into a much larger ramp space and hangar that not only allow more room for future work as well as serves as an important divert base for Bristow Louisiana locations when storms threaten.

The consolidation into the facilities at the Gulf Coast Regional Airport, which prior to Bristow’s original residence were the former airport offices, boasts a much larger ramp area of more 99,000 square feet, dedicated passenger processing and pilot areas and a much larger hangar that can house S-92 helicopters. Operations in the facilities started on March 28 and it took a lot of work by the team to consolidate the two locations into one, both of which are at Brazoria.

One AW109 and two AS350 helicopters are used to transport staff and equipment for their primary customer, the Bureau of Safety and Environmental Enforcement (BSEE).  BSEE's responsibilities include inspection and regulation of U.S. offshore facilities, and collaboration with industry to improve oil and gas recovery and ensure accurate production measurement.

“The transition had to occur without compromise to safety and the customer’s flights ops,” said Erica Baker Gulf of Mexico Facilities Manager, New Iberia, Louisiana. “We prepared prior to move week (March 21-25) by identifying office allocations, purging unneeded items from each site, repairs and maintenance of plumbing and lighting, cleaning up of interior hangar and offices of the original Bristow base which had been warm stacked since 2017.”

“We went through every area and recycled what we could and kept only what we needed so we could be efficient – we did a really good purge at both locations,” added Baker.

“We cover the largest footprint of any district for BSEE, which covers the entire coast of Texas from the Louisiana border, all the way down to the border of Mexico and up to 200 miles offshore,” said Lead Pilot Clay Voss. “As far as what we had at the Era base and by moving to this consolidated Bristow hangar, it is a drastic and dramatic change for the better for the customer. A lot more room and convenience and the BSEE team have their own standalone area where they can keep their items. I’ve received nothing but good feedback from them so far.”

“The move gives us much more room for expansion and enhanced ability to accommodate customer needs,” said Voss. “At the old base, we were pretty limited and did not have the space to expand. With the use of this new hangar and ramp area, they have been repainted to accommodate S-92s, AW139s, as well as the smaller aircraft. At the previous base, the pilots and customers were all in one area while today we now have separated pilot areas for planning and customer areas. It is organized the way you would like it to be from a pilot and customer standpoint. We are now in an excellent fallback position for the western side of the Gulf during hurricane season too.”

“The customer has been very excited about these new changes,” added Baker. “We are also looking at our other locations to see if we can find other efficiencies where we have some smaller operations where consolidation might work better.”

Prior to the merger of Bristow and ERA Helicopters, each company had operated a base located on the Gulf Coast Regional Airport in Angleton, Texas. “LifeFlight’s building was the only thing that separated us,” added Baker.  Since the merger Bristow transitioned from the smaller location at the end of the runway to the original Bristow site. For reference, the location is at 8015 Airport Way, Angleton, TX 77515, 979-849-8637. 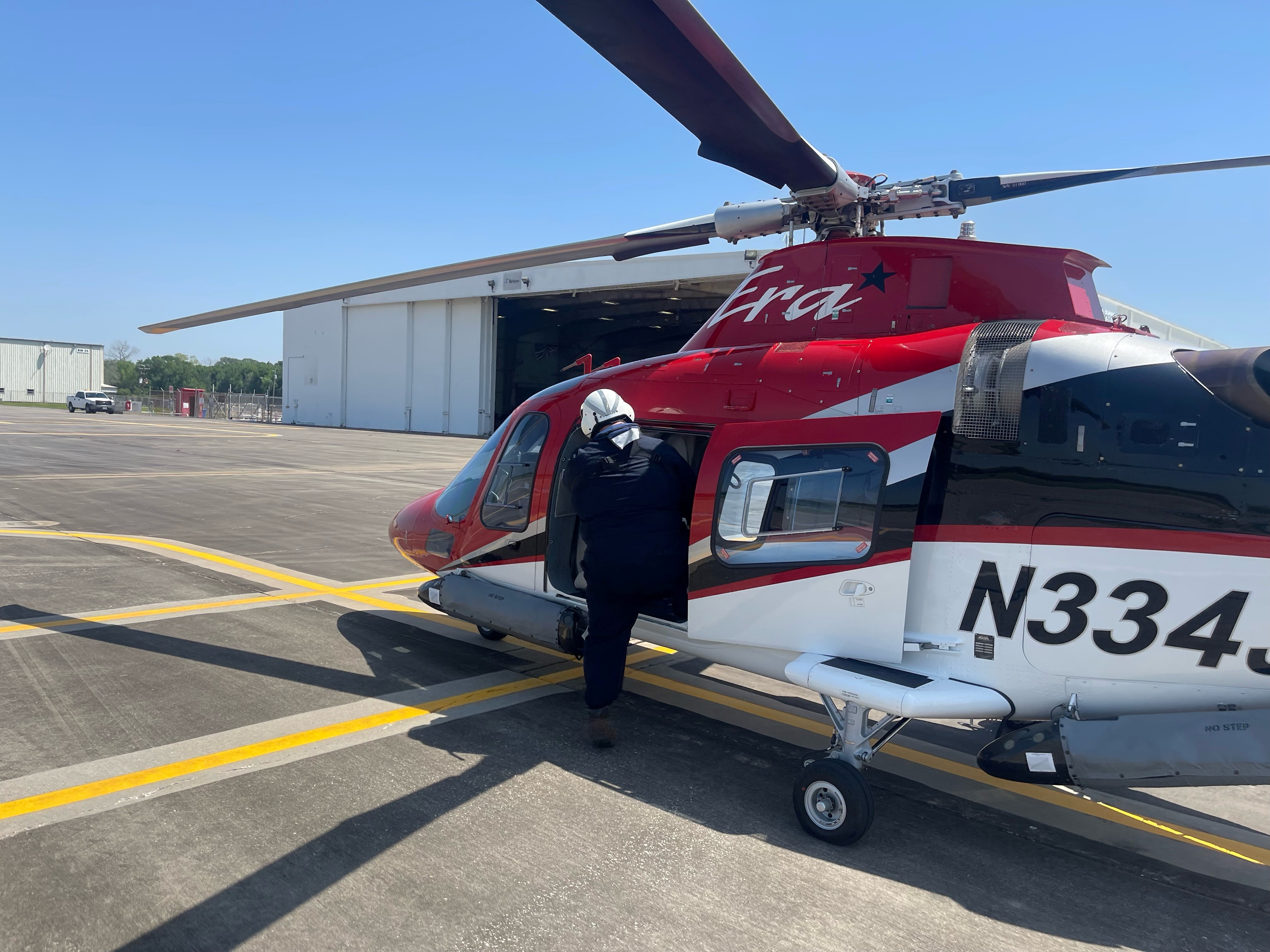