Bristow brings back the silver for support to British Armed Forces 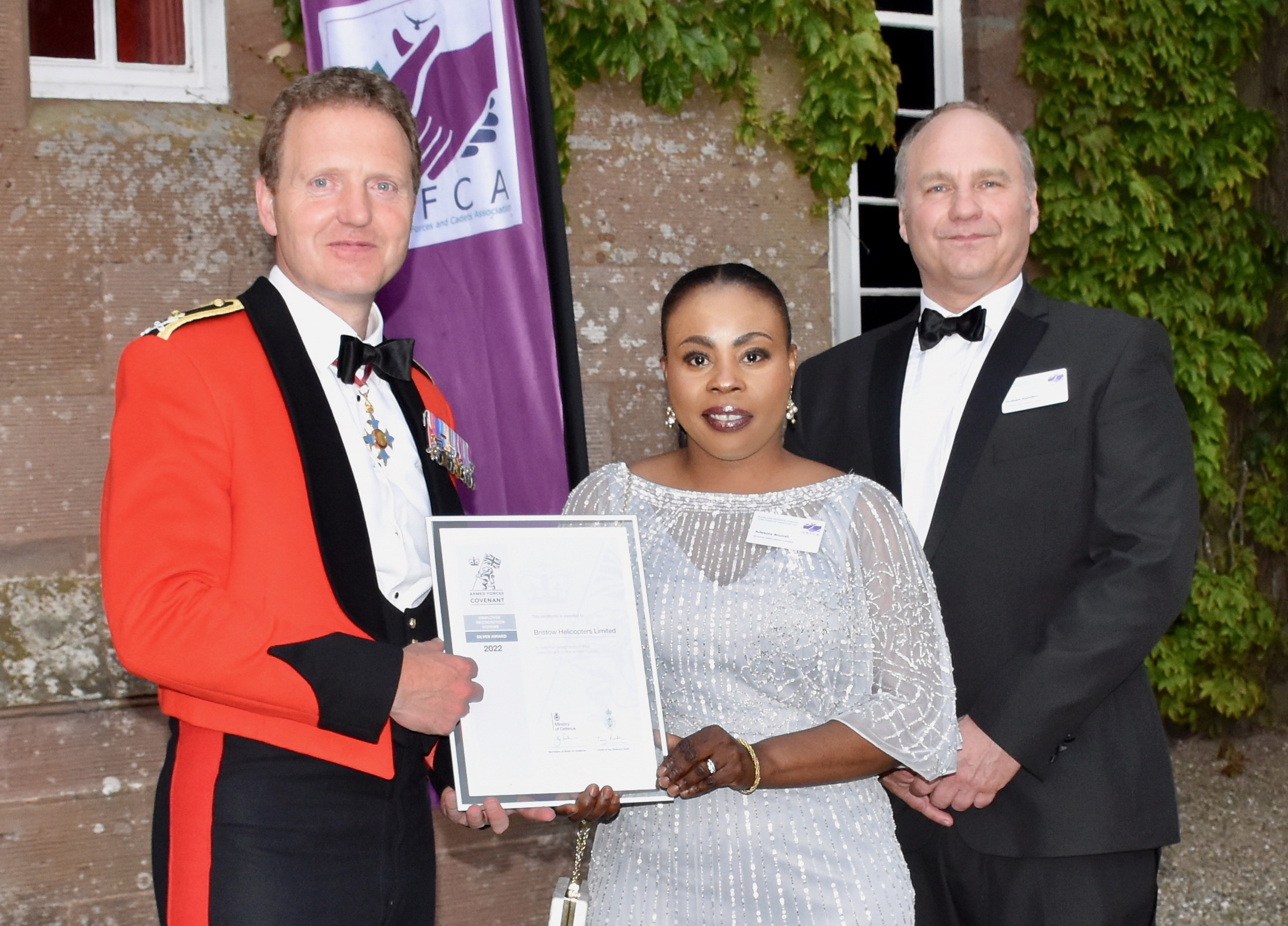 It is no secret that Bristow values the skillsets that veterans and reservists bring. Bristow has sought opportunities to recruit veterans and has just generally made it easier to get their foot in the door, especially in the United Kingdom. Whether veterans or reservists are pilots, engineers or support areas, they bring the experience and values that Bristow prizes most.

Those efforts paid off recently when Bristow was upgraded from Bronze to Silver Award status for 2022 under the Defence Employer Recognition Scheme (ERS) by the Highland Reserve Forces and Cadets Association (HRFCA) during a recognition event on June 16.

“It was an honour to receive the Silver Award from Major General William Wright, the Senior Army Officer in Scotland,” said Graham Hamilton, Deputy Director of UK SAR, who accepted the recognition on behalf of Bristow. “The award demonstrates our commitment in supporting veterans and those in reserve service. Bristow is proud to support those with armed forces associations, enabling them to pursue a Reservist role and transition out of the Armed Forces.”

Currently, though we are unable to provide specific numbers, more than 40 percent (perhaps closer to 50%) of our work force are ex-military personnel, said HR Business Partner Adesola Arunah. Part of the reason for such a high percentage of veterans is that when Bristow began delivery of the UK Search and Rescue service (SAR) in 2013, Bristow replaced the Ministry of Defence service. Bristow had commenced a managed transition program, which was aimed at transitioning military service leavers into civilian SAR.

UK Search and Rescue Clinical Manager Mike Henson joined the Royal Navy when he was 17 as a radar maintainer, then became an aircrew member on the Merlin helicopter before moving over to SAR in 2011. He worked in SAR for the Royal Navy for five years before he joined Bristow in January 2016. He was part of the transition when Bristow took over UK SAR from the Royal Navy.

“Leaving the military can be an extremely difficult process for anyone; however, this was exacerbated by the fact I joined the Royal Navy from school and didn't know what to expect from a civilian employer. There are a huge number of ex-military personnel working for Bristow which helped the transition on a practical level. However, I believe that Bristow lives and breathes our core values: safety, integrity, passion, teamwork and progress and these values resonate with military personnel, and this is why so many veterans are attracted to Bristow as an employer.”

He adds that he feels his contributions are valued and that he is continually stretched to achieve the best I can possibly be. “The professionalism, ethos and 'can do' is very similar and there are obviously some trade specific similarities. But the open-door culture and the communication throughout Bristow is very different from the military with a flat hierarchy where everyone's opinion is heard and more importantly considered.”

“Over 60 percent of the leadership team in our UK SAR division are ex-military including the Senior Director of SAR operations and the Director and Deputy Directors of UK SAR,” said Arunah.

The move up to silver status took some hard work at recruiting efforts. Bristow was one of 15 companies that was recognized with the Silver Award. Bristow had earned its ERS Bronze Award in November 2021.

Silver Awards holders must demonstrate support for defence, employing reservist, actively communicating and upholding a positive stance to their employees via established HR policies and procedures. Silver Award holders support reservists by showing flexibility to plan for and allow them to fulfil their annual training and mobilization commitments.

Bristow has also signed the Armed Forces Covenant and has committed to helping members of the armed forces community have the same access to government and commercial services and products as any other citizen. The Covenant supports serving personnel, service leavers, veterans, and their families.

Bristow actively encourages all employees who are undertaking reserve military service to make the HR Department aware of this so appropriate support can be provided. Bristow provides one week of paid leave and the other week is unpaid, but leave can be taken. In addition, employees who are absent from work due to mobilisation will retain their continuous employment and they will also receive support upon return.

“Bristow welcomes the additional skills that may have been gained through reserve service and aims to utilize the skills accordingly,” said Arunah. 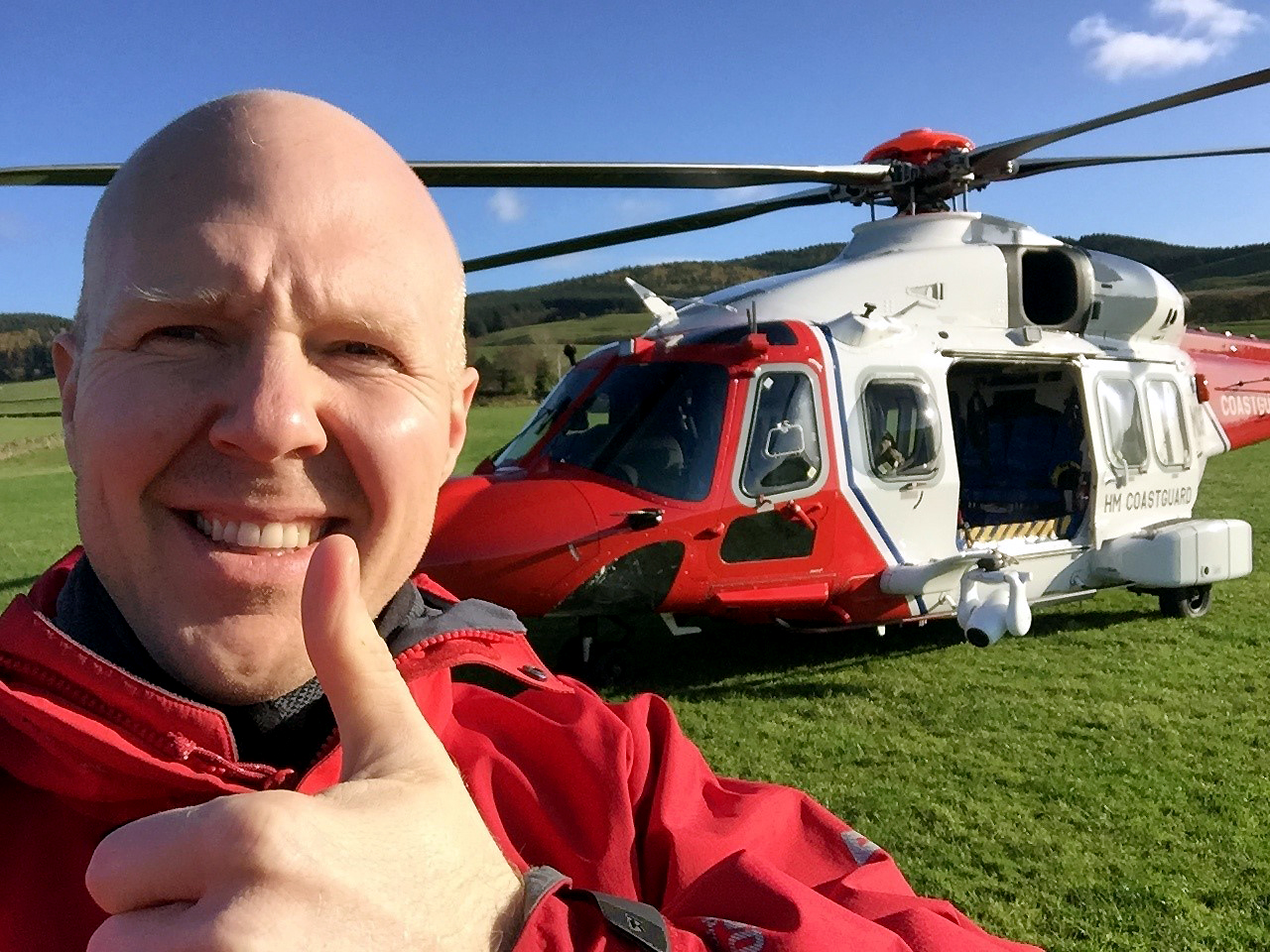 UK Search and Rescue Clinical Manager Mike Henson served in the Royal Navy performing SAR before he joined Bristow in 2016. He says the high percentage of veterans working for Bristow and shared similar values with the Royal Navy made the transition easier. 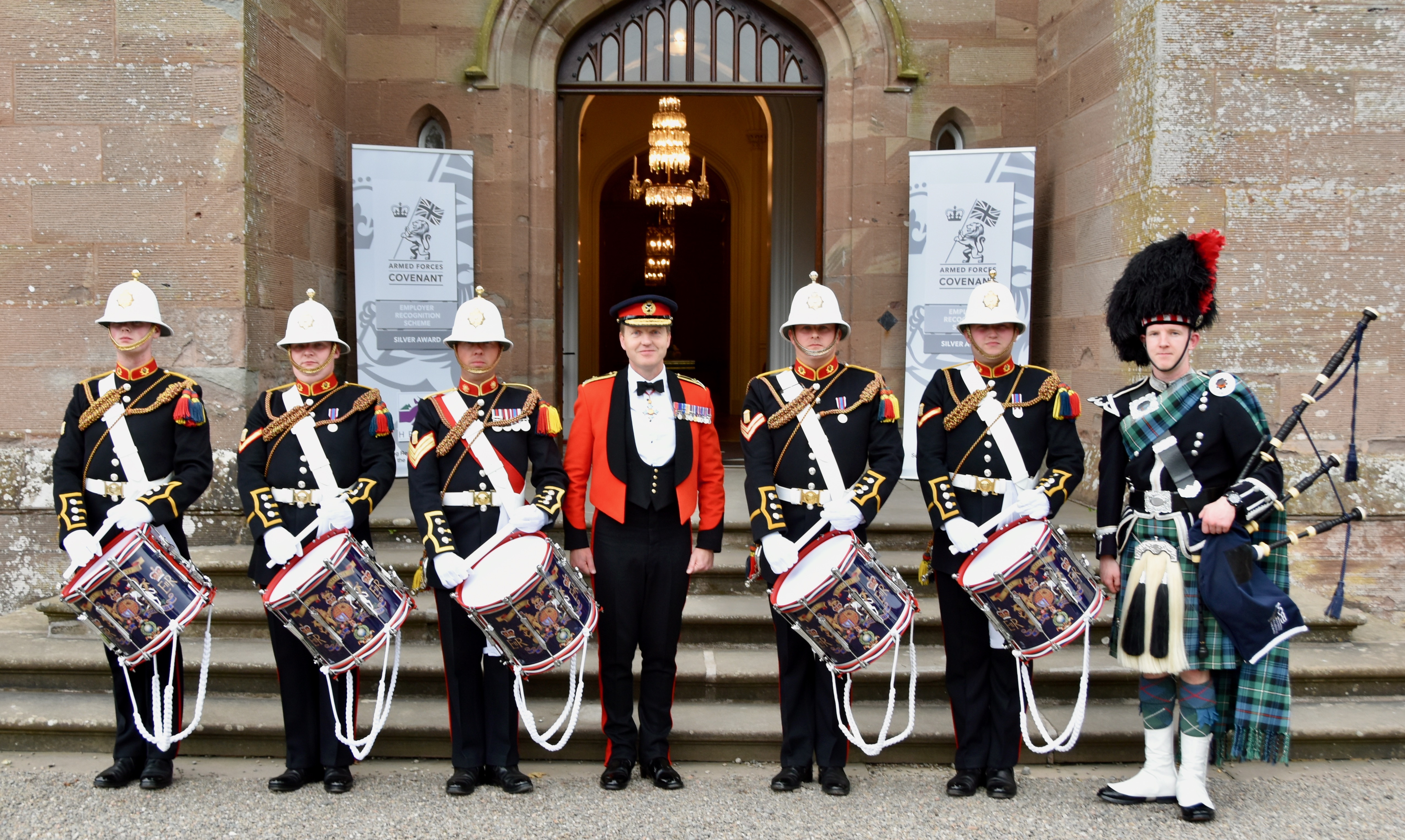 The piper welcomed guests to the event at Scone Palace in Perth and provided a traditional musical backdrop for the event. The drummers belong to the Royal Marine Corp of Drums and demonstrated their drill, drum and bugle skills before joining the Major General William Wright in toasting Her Majesty the Queen.