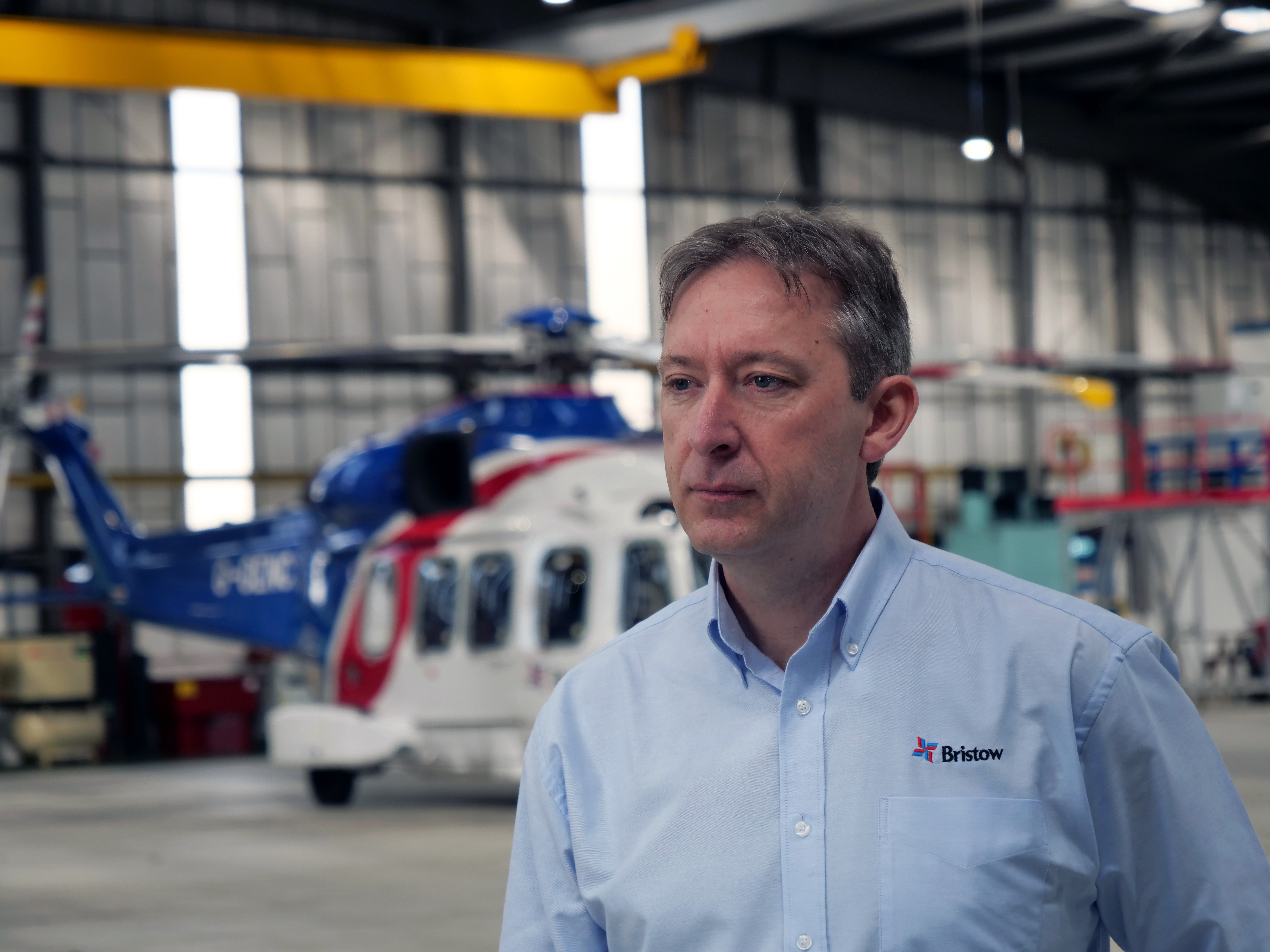 Guy Holmes manages the pilots for the UK and that requires him to forecast our needs throughout the year based on new contracts and changing workloads.

Bristow employees stay in their jobs for many years, which is often counter to the trend of most companies where the door is constantly revolving, and that is one of the many strengths that Bristow Flight Operations Manager Guy Holmes sees in Bristow today.

“About a year ago I was in a room where we went around the group introducing ourselves, even though most of us already knew one another. When I said that I’d been in the company 20+ years, I might have expected a small murmur of acknowledgement or something. But everyone present, one by one, gave their length of time with the Company and had all been in Bristow longer than me. People who've been in the company 30, 35 years - It's not uncommon at all,” he said.

Holmes remembers being the newest employee in the company when joining in 1999, yet he is now one of the longer serving pilots at Bristow, but as he adds, certainly not the longest serving. In fact, he remembers writing letters to the Company when he was only 15 years old. “I was very fortunate to get taken on by Bristow and sponsored through my training at Redhill, in the days when we did all our training down there, back at the end of the 1990’s. We were the last course to be trained at Redhill before the HP courses moved to the U.S.A. and then later, back to the U.K.”

He has always been based out of Aberdeen, U.K., but had plenty of opportunities to work around Bristow, including Norway and the Netherlands. “I’ve worked through all the U.K. bases, and I’ve been out to Galliano and Houston a few times, so I’ve been lucky enough to travel, but I’ve always been based here, which is our busiest hub, training centre and operating base in Europe.”

Holmes does not get to fly as much as he used to, but he still flies the S-92 so he can stay current and in touch with the day-to-day operations offshore, while most of his time is spent managing the U.K. pilot workforce.

“Typically, I'm looking at the pilot numbers and trying to project ahead. We work with commercial bids, so when a tender project comes in needing a Flight Ops perspective, I'll do all the planning and look at the logistics, working out those details,” he explains. “We're looking at our pilot numbers long ahead of the requirement. It takes us about 18 months to bring a new pilot on board, but contracts will sometimes change hands in about three to six months, so we're forever just trying to tailor our pilot numbers to make sure that each of our bases is equipped with the right aircrew levels, the correct numbers or captains, training pilots, all on the right roster patterns.”

Holmes believes Bristow can make a good employee into a great pilot, and he is proud that the U.K. is the only region that still sponsors pilot candidates for flight training, and it is just one of the ways that Bristow helps to bring on new pilots into the industry. “Bristow has always invested heavily in simulator technology and our training team is second to none!” Holmes also meets with aspiring pilots at numerous Helicopter Careers Open Day events held throughout the year, trying to encourage those looking for a role in aviation to consider the many opportunities that helicopter flying can offer, over and above the traditional airline careers.

A good pilot, he says, is: “conscientious, client-focused, committed to safety, and that all of those attributes come together to make a great pilot.”

But also important is integrity. “We need pilots to have integrity. We need engineers, pilots and all the crew here to have integrity. We've got to be able to hold our hands up to events, issues that we've experienced, where things have not gone as expected. If one pilot can make a mistake, anyone can make that same error," he said. “So, we're very quick to put our hands up to events, to say that this went wrong for me. If it's gone wrong for me, it could go wrong for someone else at some point. So, let's bring it out, let's get it into the open, let's discuss it, and see if we can resolve it. There is a ‘Just Culture’ within Bristow, developed over many years of experience and learning, and I feel it works well. We have a good team that will look out for one another.”

Teamwork also matters too. “It's just a really nice place to work, where you can be working with the same people year after year, not see them for a while, then come back together again at a new operation. And everyone, whether you're working in Norwich, Aberdeen, Stavanger, Houston, they have the same kind of ideals, goals, and core values. People are trying to do the same job, trying to achieve the same thing in the same way.”

“I've been through several bases around Europe and through America and what I actually like about it is that the bases are the same. You see the same posters on the wall, you see the same people, you meet people that you've trained with and have been in the same operation as you in the past. So, I like the fact that Aberdeen isn't different. It's like all the others. It's a group mentality that when you work for Bristow, you follow the same standards.”

“And I think that's what the clients like when you get Bristow, whether it's in Nigeria or Norway or the U.K., it's the same Bristow, it's the same standards you're getting throughout - The Gold standard!” 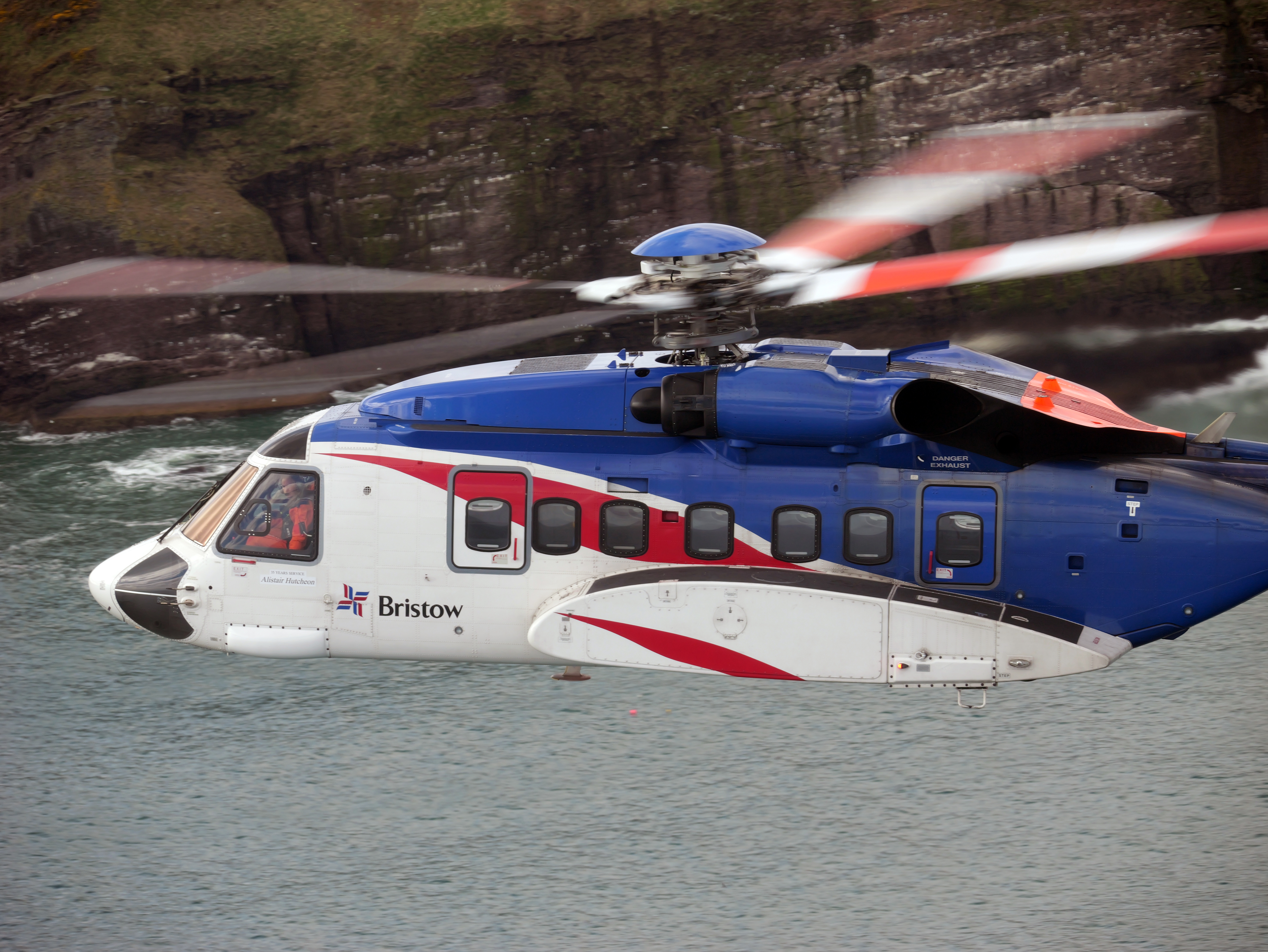 Guy Holmes flies the S-92, which he says can carry the most passengers and is ideally suited for the challenging North Sea conditions. 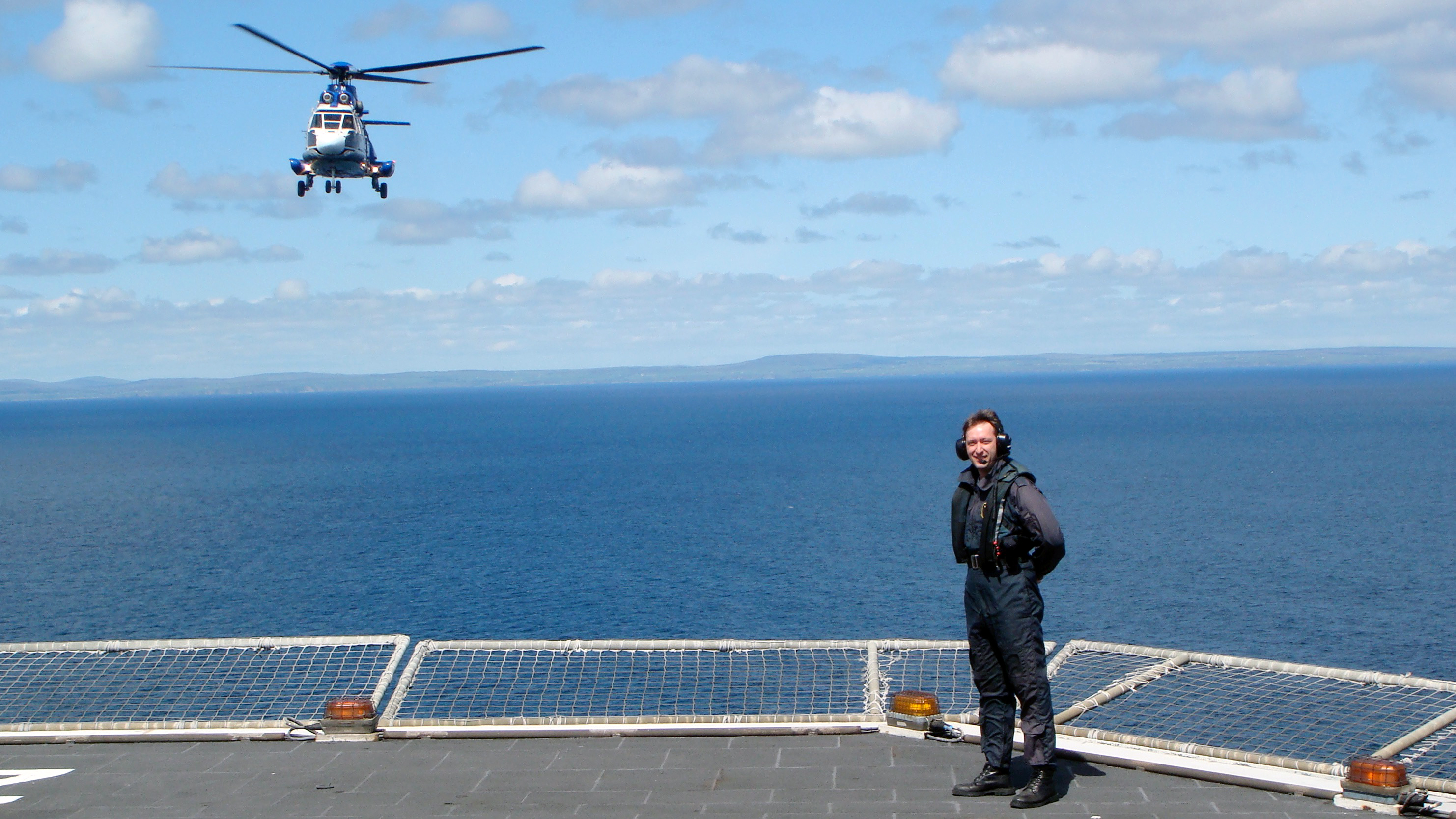 Guy Holmes shown on a platform in his early days with Graham Chiverton flying alongside in an AS332L1 Super Puma, also known as the Bristow Tiger.