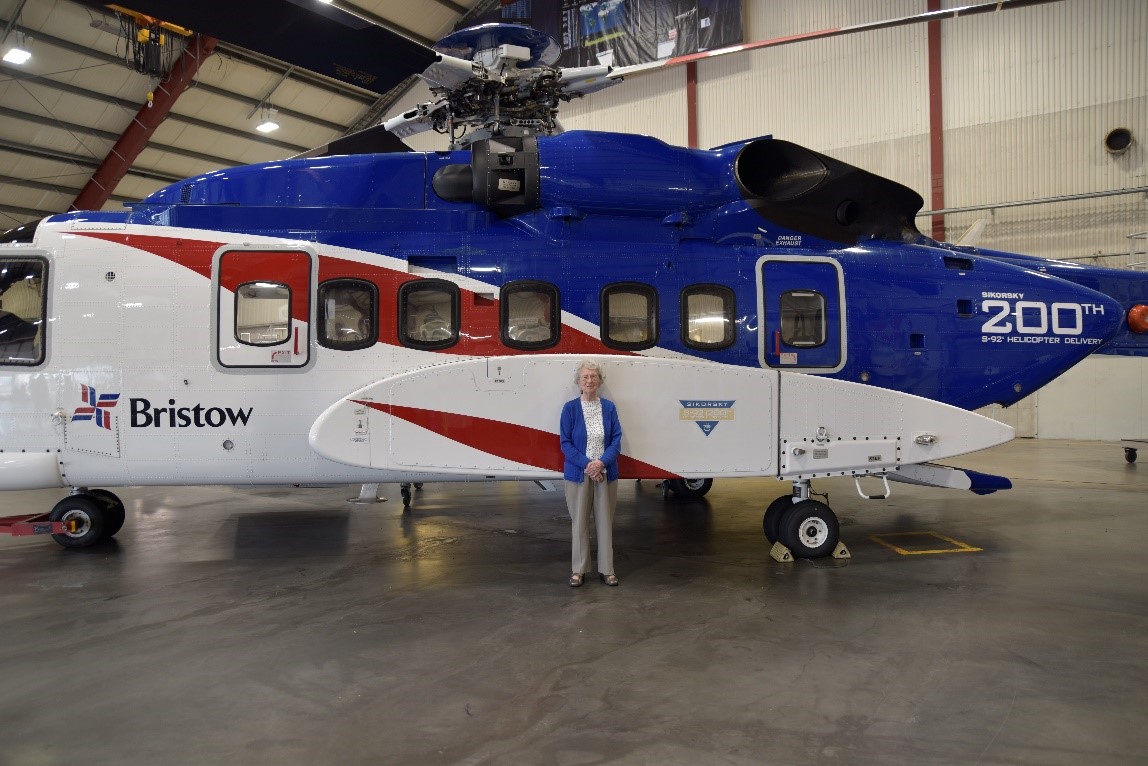 A cruise holiday to the Norwegian fjords resulted in a surprise visit to the Stavanger operation for one of Bristow’s oldest retirees recently – sparking some fond memories of the early days of the business.

Viv Richardson, 93, started work at Bristow’s Redhill base in 1974 and stayed with the company until she retired in 1988.

They were formative years for the company and Viv witnessed some remarkable changes – from the first days of the oil boom as the Aberdeen business took flight to the transition from aircraft like the Westland Wessex to the Super Puma AS332L.

But perhaps one of the most interesting aspects is that while her memories show how much has changed in the industry, they also underline how some things about Bristow have remained the same.

“My main memory of Bristow in those days is that it was just such a fun and friendly place to work. I thought it was fabulous!” said Richardson. “It always had such a pleasant atmosphere. Almost like a family.”

Viv worked in the Ops Department with Phil Hunt, and remembers other names … such as Mike Norris, Tommy Bayden, Pym White, Sandie Richardson and, of course, Alan Bristow.

“People were always kind, and the work was always varied,” Viv said, “and it wasn’t just standard office duties. We got to experience so much the business had to offer. From flying as ‘ballast’ on new ‘green’ aircraft, to visiting Aberdeen on Alan Bristow’s company HS125 jet.

“His office was just at the other end of the hall. Everyone enjoyed working with him."

“From my position in the Ops Department I was able to see so much of what was going on across the business. And it was so exciting! The oil and gas industry was booming and we were right in the middle of it all.

“We were learning all the time too, particularly about safety. We introduced things like push-out windows and painted undercarriages which remain on helicopters today.”

When Richardson retired in 1988, Sandie Richardson, who by this time had become Viv's daughter-in-law, returned to the business to take up Viv’s post.

“It was great to be able to keep Bristow in my family,” said Richardson. “Sandie keeps me up-to-date with what’s going on.”

It’s been more than 30 years since Richardson worked for Bristow, but she remains fascinated by aviation and took the opportunity to visit the Bristow base in Stavanger while on holiday there recently.

“I’ve got so many fond memories of my time at Bristow,” she says, as she gives an S-92 in the Stavanger hangar a close-up inspection.

“The aircraft have clearly changed a lot - they’re huge - and I know I wouldn’t recognize too many faces from my time. But from what I hear from Sandie, it sounds like I’d certainly remember the business as the same one I worked for back in the 1970/80s.

“It’s still exciting, caring and innovative… perhaps it is true that the more things change, the more they stay the same.”