All aboard! Bristow Pilot Sergio Orduz followed his heart

National Hispanic Heritage Month celebrates the history, cultures, and contributions from those whose ancestors came from Spain, Mexico, the Caribbean, Central and South America. We are excited to feature Bristow employees who shared their Hispanic heritage through personal stories, experiences and even family recipes. 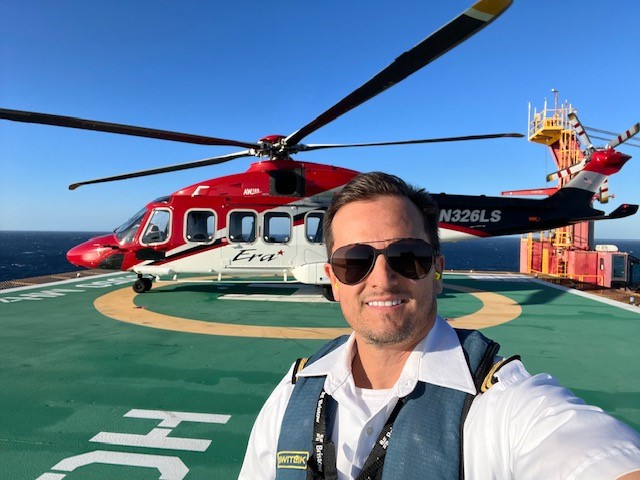 Sergio Orduz in front of an AW189 at an offshore platform.

Orduz planned to attend the Colombian Air Force Academy out of high school, earning his stars while flying in defense of his native Colombia.

But not everyone had faith in this aspiring military pilot. Orduz‘s high school counselor advised him to “choose another path” and that he had “no chance of being accepted” into the ultra-competitive Colombian Air Force Academy.

The high school counselor wasn’t completely wrong. Admission into the academy was rigorous. The application began in the middle of Sergio’s senior year, and consideration for admittance was predicated on challenging academic and physical tests. Roughly 4,000 candidates apply each year, but just 150 receive an appointment, less than a four percent acceptance rate.

Had Orduz taken the advice of his high school counselor, the story might have ended here, and he very well might not be flying AW139 and AW189 aircraft today.

But selecting another career path never crossed Orduz’s mind, and passing up an opportunity, no matter the obstacles, countered his deepest core beliefs.

Nearly eight months after applying and being told he didn’t have what it took, he persevered.

“I did it, I was accepted into the Colombian Air Force Academy without any help or outside influence,” Orduz said. “I surprised everyone.”

He said he knows exactly where his determination and grit originated.

“My mom was widowed when I was very young,” he said. “She taught me discipline, organization, determination, and toughness because we didn’t have a choice,” Orduz said. “She showed me how to set and reach goals.

Loosely translated, the phrase means, “You have to take the train, when it arrives. You don't know when the next one will come.” It’s a belief widely shared among Colombians, and it would be the mantra that Sergio invoked throughout his time in the military and thereafter.

At 18, Orduz left home to become a cadet. He was the first in his family, including aunts, uncles, and cousins, to join the military, with a goal to one day fly helicopters.

“I saw two paths. If I became a fixed-wing pilot only, I might never have the chance to fly helicopters,” Orduz said. “If I flew helicopters, I could always switch to fixed-wing.”

Orduz graduated the academy as a second lieutenant trained to fly fixed-wing aircraft. From the academy, he chose helicopter school and was stationed at Air Combat Command No. 4, in Melgar, Tolima, about 60 miles southwest of Bogota.

The first helicopter he flew in the military was an Enstrom F-28, a small, light piston-engine powered aircraft. Three months later, another opportunity emerged.

“The commander of our flight school announced three openings to fly the UH-60L Black Hawk helicopter,” he said. “I didn’t have to think about it. What a great helicopter!”

Another train had arrived, and Orduz wasn’t about to miss it. The catch, he would be flying at night and undertaking dangerous missions. No problem.

By the time he left the military in 2009, he had attained the rank of first lieutenant and acquired more than 2,000 hours flying the Black Hawk. Sergio’s high school guidance counselor never would have believed it.

Following his time in the Colombian Air Force, he flew a Bell 206 and AS350 for a Colombian company, but Sergio longed once again to fly the mighty Black Hawk. That train arrived in the form of an opportunity to serve as a Mission Pilot, supporting the United Arab Emirates.

“I moved to Dubai alone in September 2012 to take that job,” he said. “I got married to the love of my life, “Chio,” via Skype! She was incredibly supportive even though we were 8,500 miles apart. She joined me in Dubai six months later.”

In 2019, the contract in Dubai ended, and Orduz went back to Colombia. By this time, he was a seasoned rotorcraft pilot in search of new opportunities. Even with all his experience, he needed his Airline Transport Pilot (ATP) certificate to take advantage of openings across the industry. No problem. He achieved the milestone in one month.

But flying again wouldn’t happen immediately. “When you’re in between jobs, it’s important to have a hobby to keep your mind sharp and your body healthy. Mine was mountain biking,” he said.

Orduz eventually connected with a pilot who flew for Bristow and shared available opportunities, so he jumped at the chance. Another train had arrived, and he wasted no time boarding it.

“I interviewed in Lake Charles, Louisiana with Jamie Comar (Chief Pilot & Director of Training) and Jason Hayes (Lead Instructor). I was comfortable immediately.”

Orduz was certified to fly both the AW139 and AW189, based out of Houma, Louisiana. After a career of flying helicopters from piston to twin turbine engines, the Bristow VFR Captain says he really loves his job and his fellow colleagues.

“I am grateful my instructors, the training and operations’ staff, and also every pilot who is showing me how great it is to work at Bristow and fly out of the Houma base.

“I took advantage of every opportunity I had, regardless of the challenge. And also my family. It’s most certainly a cultural trait you’ll hear from Colombians,” he said. “I am grateful to my mom for her sacrifices and instilling in me the values that helped make me successful, and to my wife for her love and support as I moved through my career.

“My mom was widowed when I was young, but I am eternally grateful to my stepfather Juan who is my mentor and my copilot for every major decision in my life. Colombians are all about family!” 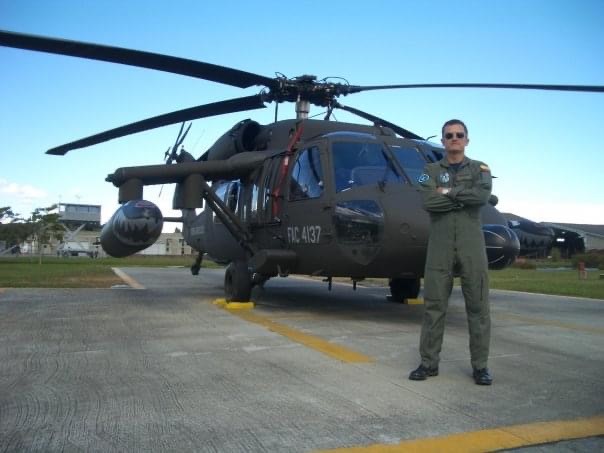