HM Coastguard’s first operational drone flight will join manned helicopters, planes, boats and cliff rescue teams on lifesaving missions at sea and over land in North Wales for the first time, this summer.

The drone, initially trialled a year ago during the first easing of pandemic restrictions, will fly from the HM Coastguard helicopter base at Caernarfon, and will also participate in a series of major training exercises with other 999 teams.

Remotely piloted aircraft are expected to play a key role when UKSAR2G, the second-generation of search and rescue service, is due to begin operations in 2024.

Maritime and Aviation Minister, Robert Courts said: “Keeping people safe on the sea and around our coast will always be a priority, which is why we continue to explore new and cutting-edge ways to modernise search and rescue efforts.

“Drones have the potential to help our coastguard teams save even more lives and it is right we are working to advance these technologies here in the UK.”

Secretary of State for Wales, Simon Hart said: “We are hoping for a busy summer in the beautiful setting of North Wales and HM Coastguard plays a vital role in keeping local people and visitors to the area safe.

“It’s fantastic that this new and exciting technology is being rolled out in Wales first, flying alongside rescue teams and adding another layer to HM Coastguard’s search and rescue capability.”

Director of Her Majesty’s Coastguard, Claire Hughes said: “Summers on the coast are always busy and we will continue to use technology which could potentially save lives. When every minute saved can prove the difference between life and death, technology like this has a vital role to play in those moments alongside our helicopters, coastguard rescue teams and our partners from the RNLI to independent lifeboats and hovercraft.”

Neil Ebberson, Director UK Search and Rescue at Bristow, said: “Flying the Schiebel S-100 remotely piloted system alongside our manned aircraft from Caernarfon and the 2Excel surveillance aeroplane was a landmark for the HM Coastguard air search and rescue service.

“While we regularly train with both the 2Excel fixed wing crews and our Caernarfon based S92 crews, this was the first time the three aircraft types had operated and integrated in the same airspace.

“Participating in full-scale training exercises and integrating fully into rescue missions alongside HM Coastguard’s manned aircraft, vessels and vehicles will further prove the capability of the drone and extend the reach of the air rescue service.  This builds on the successful demonstration of operational capability when we delivered overwatch missions for HM Coastguard over the beaches and mountains of Wales during summer 2020.

“Our close work with the CAA, Caernarfon Airport and the significant stakeholder community across North Wales has been key to achieving this significant milestone.  Our ability to successfully integrate the technology into the existing service is delivering on our commitment to operational excellence.”

Bristow undertook two years of rigorous trials and testing, before introducing the drone for use from the HM Coastguard base at Caernarfon as a safety overwatch and monitoring aircraft, allowing the manned helicopter crew to remain able to respond to lifesaving missions.

Andy Offer, co-founder and Director of 2Excel Aviation, said: “At 2Excel we are highly experienced in rapidly turning challenging aviation concepts into cutting-edge capabilities. We’re looking forward to continuing to work alongside Bristow – in partnership with the MCA – to develop the inter-operabilities of the platforms, partners and people who deliver Search and Rescue to enhance the service.

“While providing fixed-wing search and overwatch missions using our highly customised King Air 200 platforms, we have built a strong working relationship with the HM Coastguard helicopters operated by Bristow’s crews around the UK. It was therefore a natural step for us to integrate a drone into the mix, which will only enhance the life-saving capabilities of the SAR service the MCA provides.” 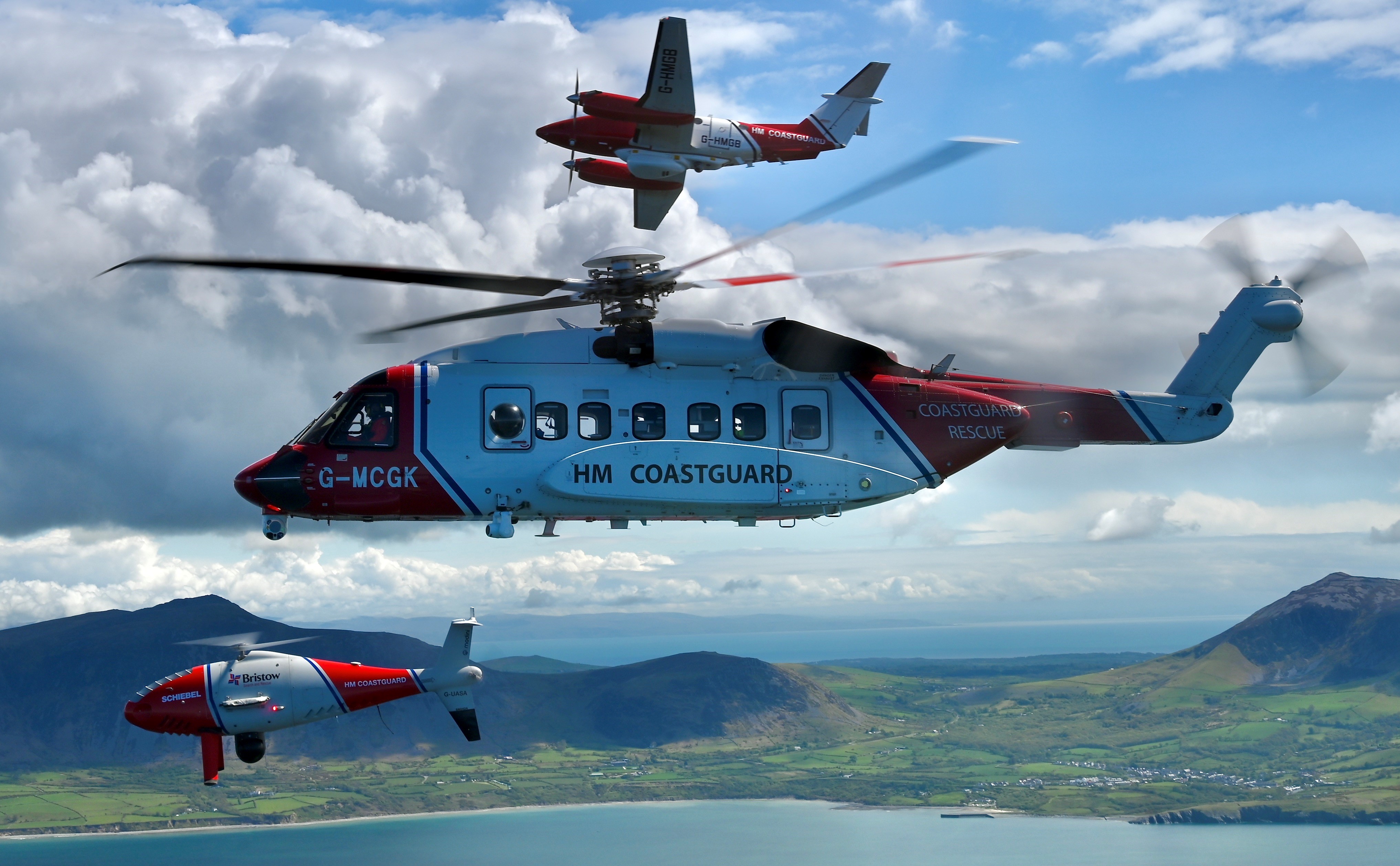 HM Coastguard is a frontline delivery and emergency response organisation which is part of the Maritime & Coastguard Agency.

Bristow Helicopters Ltd is the provider of helicopter search and rescue (SAR) services in the UK, on behalf of Her Majesty's Coastguard, having been awarded the UK SAR contract and the Gap SAR contract for Northern Scotland. Bristow Helicopters has a long history of providing world class SAR services, beginning in 1971 at RAF Manston, and has flown more than 60,000 SAR operational hours in the UK and conducted over 15,000 SAR missions, during which more than 7,000 people have been rescued by Bristow crews and helicopters. For more information on Bristow’s SAR operations, please visit www.bristowsar.com

Bristow Helicopters Ltd. has served the offshore energy transport industry in the UK for nearly 60 years.

2Excel is an innovative, high performance aerospace services business working across industries from defence and security to engineering, events and disaster response. The company specialises in ‘doing difficult things well’, from creating the UK’s only airliner-sized flying testbed to maintaining crews at very high readiness to launch life-saving Search and Rescue missions or tackle oil spills anywhere in the world.

Founded in 2005 by two Royal Air Force pilots, 2Excel has grown from five people and four aerobatic aircraft to some 400 people and a fleet of 28. In 2018, 2Excel Aviation became 51 per cent employee-owned through the creation of an Employee Ownership Trust.

The CAMCOPTER® S-100 is a vertical take-off and landing (VTOL) rotary UAV, which is used extensively around the world in land and maritime environments, by international agencies such as the European Maritime Safety Agency.

With the capability to travel 200 kilometres from its home base, the S-100 is flown by a pilot in a remote location using digital control and imaging technology to allow them to see through the eyes of its on-board cameras.